A one-and-a-half-minute trailer for "ReUnation - A Tribute To Running Wild" — the upcoming tribute to German metal legends RUNNING WILD which will contain cover versions of songs exclusively from the albums "The Rivalry" (1998), "Victory" (2000), "The Brotherhood" (2002) and "Rogues En Vogue" (2005) — can be viewed below.

Tentatively due in the fall as a limited-edition double CD (sold for the price of a single album), "ReUnation - A Tribute To Running Wild" will feature artwork (see below) by Romanian graphic artist Costin Chioreanu, who has previously worked with such bands as ABSU, CENTINEX, DEMONICAL, NEGURA BUNGET and THUNDERSTORM.

So far the following bands/tracks are confirmed to appear on the set:

RUNNING WILD released a "best of" compilation, entitled "Best of Adrian", in November 2006 via G.U.N. Records. The set includes selections covering the previous nine years of the band's recording history (while they've been signed to the G.U.N. label). 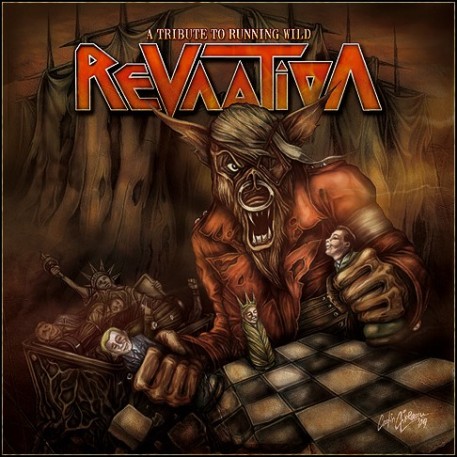