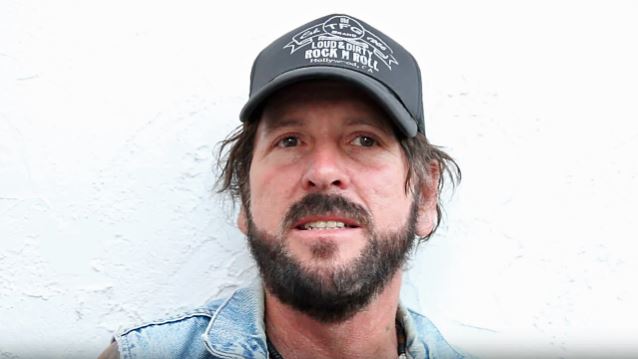 During an appearance on the August 22 edition of the SiriusXM satellite radio show "Eddie Trunk Live", L.A. GUNS guitarist Tracii Guns was asked for his thoughts on the reunion of long-estranged GUNS N' ROSES singer Axl Rose and guitarist Slash for the "Not In This Lifetime" tour, which kicked off in April and is scheduled to last at least through next year. Guns, a former bandmate of Axl's in the very early days of GUNS N' ROSES, said: "I think it's the greatest thing there could be for rock and roll right now. People are gravitating to it by airplane loads. And they're sounding great. And Axl's sounding great."

He continued: "I'm just really glad to say that, hey, man, guys with real talent have real talent, and it just doesn't diminish because you age. GUNS N' ROSES just sounds as good as they ever did right now."

Tracii also talked about the fact that the GUNS N' ROSES reunion tour has not proven to be the train wreck that many people expected it to be, with more than half of the band's stadium shows selling out.

"Well, it's kind of like the PANTERA phenomenon," Tracii said. "Those guys, and METALLICA to a point, they always had that air of mystery about 'em where people just gravitate toward. And that's a cool thing about Axl. All the hateful things that people said: 'Oh, he's gonna be late every night,' 'They're not gonna get along.' The coolest thing about Axl is he loves to prove people wrong. And he just did it again. And that's a great quality to have. He goes from being the reclusive guy, the untouchable, mysterious man to, 'Hey, no, I'm not. Here I am, onstage, on time, every night. And I'm also singing for AC/DC, and I'm great at it.' [Laughs]. It's, like, 'Wow!'"

Elaborating on Axl's guest stint with AC/DC, Tracii said: "I saw [videos of some of the performances], and it sounded great.

"In this day and age, those opportunities are more viable; they're just more realistic to be able to do multiple things, and he's doing it on the biggest possible level. Realistically, he's singing in the two top-grossing rock and roll bands of all time — both of them! It's not gonna ever be any cooler than that."

He added: "I don't think that many people really understand, especially guys that are really talented, how big of fanboys they can be. All the way down to [Jimmy] Page with that Roy Harper guy. Everybody's got their heroes, and we all feel not worthy. And when we're validating by them, it's just… you're twelve years old. And that's why just watching what Axl's been able to do in these last twelve months is just amazing to me. And it's all positive; there has not been one negative thing. And that's the way it should continue to go."

In a January 2007 interview with the South Wales Echo, Tracii stated about his early years as a member of GUNS N' ROSES, "If I had stayed with Axl, I don't know if GUNS N' ROSES would have been any better or worse but I think it would have been a very different band. We would have had a bit more fire. But the key to that band's success was Axl because at that time his singing really connected with people on a social level."

He continued, "I haven't spoken to Axl since 1988, but we still have a lot of mutual friends. I don't wish him ill, but it's hard because he never stops saying bad things about me. He was on my MySpace page doing that very recently.

"Axl's problem is that if people don't support him a hundred percent in what he's doing, he just doesn't want to know them anymore. He's so talented, but that talent comes from being a nervous wreck and some place in your head you need to be happy, which he isn't."