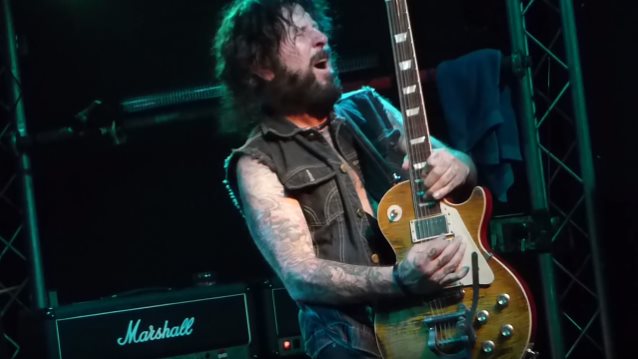 As the rebuilding continues after the devastation of the October 2017 Northern California fires, Guitar Player magazine is presenting a thrilling, all-star guitar benefit concert to support musicians affected by the Sonoma County blazes.

Andy Summers — Rock And Roll Hall Of Famer and member of THE POLICE — is headlining the event, which will also include transcendent guitar performances from the following all-star guitarists:

* Gretchen Menn, guitarist for one of the world's best LED ZEPPELIN tributes, ZEPPARELLA, who is also bringing former ZEPPARELLA vocalist Noelle Doughty with her.

* Josh Brough, the leader of the band POOR MAN'S WHISKEY wrote a special song about the fires.

* THE TROUBLE WITH MONKEYS, San Francisco's rocked-out tribute to the MONKEES.

Sonoma County resident Eric Barnett is musical director for the benefit concert, and his acclaimed instrumental-guitar group, POINTS NORTH, will also be performing, as well as holding forth as the house band.

"It's such an honor to be a part of this benefit—especially as someone who was myself evacuated, and experienced these fires first hand," says Barnett. "I was fortunate enough to escape unscathed, but I know musicians who lost instruments, people who lost homes, and businesses that were destroyed. So it's wonderful to be able to give back to the community that I live in and work with."

Titled "Play It Forward" after one of Guitar Player's awards for music mentors, the charity event celebrates the resilience of Sonoma County musicians and seeks to help them get back to making music. It's also fitting that the concert takes place at the Luther Burbank Center for the Arts (located at 50 Mark West Springs Road) in Santa Rosa, California, which was itself damaged by the fires. The show starts at 8:00 p.m.

"The rebuilding and healing continues," says Guitar Player editor in chief Michael Molenda. "The magazine was born in the San Francisco Bay Area, and it has many readers, friends, peers, and compatriots in the area devastated by the NorCal fires. The GP staff wanted to do something to help musicians who had lost their homes, their treasured instruments, and, in some cases, their livelihoods. This is a small local event with a lot of heart."

All profits from the event will be distributed to the Luther Burbank Center for the Arts and the Creative Sonoma Fire Recovery Fund.

In addition, thanks to the many guitar manufacturers that Guitar Player has relationships with, the charity event seeks to provide free replacement guitars to eligible Northern California guitarists who lost instruments in the fires.

Finally, many famous guitarists who support the benefit, but, unfortunately, could not attend to perform, have signed guitars for GP to auction for our charities. These include instruments from Carlos Santana, Joe Bonamassa, Steve Vai, Steve Lukather (TOTO), and Nita Strauss (ALICE COOPER), and with more to come!

Tickets, ranging in price from $55-$75, with a VIP package at $150, are available online at lutherburbankcenter.org, by calling 707-546-3600 or at the Luther Burbank Center for the Arts ticket office (50 Mark West Springs Road in Santa Rosa).