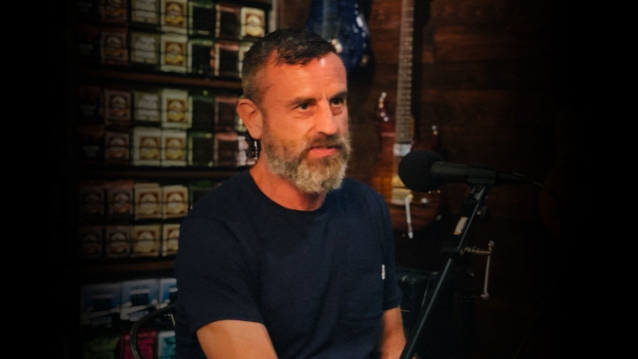 Ernie Ball, the iconic maker of Slinky guitar strings and instrument accessories, has announced the launch of their new podcast series, "Striking A Chord". The first episode features bassist Justin Chancellor of TOOL.

"Striking A Chord" is a new bi-monthly, audio-only podcast interview series hosted by Ernie Ball brand ambassador Evan Ball that features artists discussing their inspirations and passions, examining what drives them to pursue music and write songs, and uncovering the catalysts that inspired their albums, songs, style, hobbies, and more.

"Podcasts have become such an informative and relevant source for information and we're very excited to use this as a platform to get to know our artists on a more intimate level," says Ernie Ball president Brian Ball. "When Evan and I discussed the idea of doing one, we got excited about where 'Striking A Chord' could go, and we're thrilled Justin Chancellor agreed to join us on our first episode."

In this inaugural episode, Chancellor offers listeners an inside look at the TOOL songwriting process, his studio bass setup, and the band's experience of recently releasing their music onto streaming platforms after being one of the last holdouts. From Chancellor's initial reluctance to join the band back in 1995 to the reasoning behind TOOL's no-cell-phone policy at live shows, the conversation is wide-ranging, informative, and honest.

Chancellor's appearance on the podcast coincides with the release of TOOL's long-awaited new album, "Fear Inoculum", which comes some 13 years after their previous release. During the interview, Chancellor expresses his and his bandmates' gratitude for both the chemistry and longevity of the band. "I just think that everyone realizes that this is completely unique," he said. "It's as good as it gets. And when you're twenty-five years in, it's like you're pretty much quite a bit of the way through your lifespan, you know, and to think you've been a part of something very unique like this is something to be cherished and kept very sacred."

"Striking A Chord" is available now on iTunes, Google Play, Spotify, and many other popular podcasting platforms.