Frontier Touring has announced the return of triple Grammy Award-winning Californian rockers TOOL, performing in arenas across Australia and New Zealand in February 2020 — their first shows in both countries in seven years. The tour comes off the back of the band’s critically-acclaimed fifth studio album, and their first new record in 13 years, the No. 1 ARIA album "Fear Inoculum".

Currently on a mammoth 26-date tour in the USA, Danny Carey (drums), Justin Chancellor (bass), Adam Jones (guitar) and Maynard James Keenan's (vocals) groundbreaking, epic live show sees a band at the top of their powers. Their immersive live visual experience is as brilliant as the band’s music itself, and not to be missed.

Released in August, "Fear Inoculum" debuted at No. 1 in Australia and New Zealand (the band's third consecutive No. 1 album in both countries) — with No. 1 debut position also in Canada, Norway, and Belgium. In the USA, the band knocked Taylor Swift off the top spot and sold 270,000 units in its first week alone.

Yesterday, the band announced the December 13 release of an expanded book edition of "Fear Inoculum", which includes 5 x 3D lenticular cards with exclusive graphics, an expanded 56-page booklet, a download of the groundbreaking immersive visual experience (video) "Recusant Ad Infinitum" and a CD. 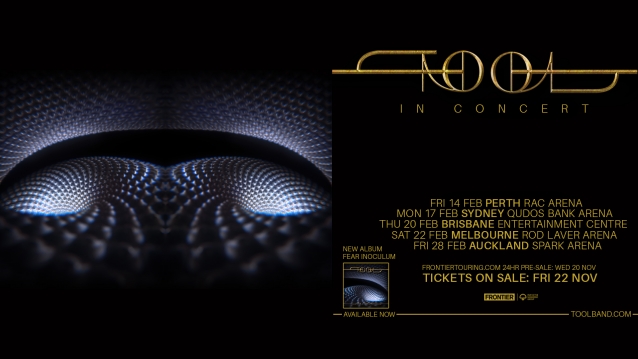