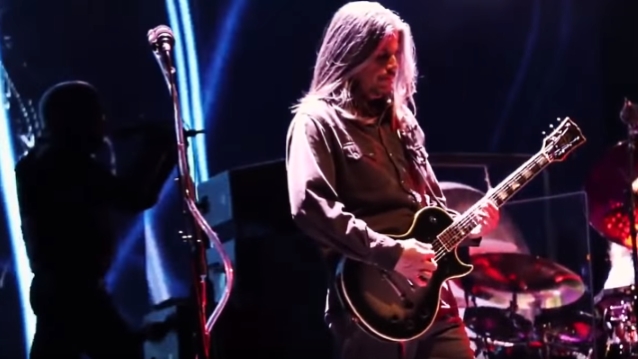 TOOL performed two new songs, "Descending" and "Invincible", as part of its headlining set Sunday night (May 5) at the Welcome To Rockville festival in Jacksonville, Florida.

Although TOOL previously played an instrumental version of "Descending", last night's concert marked the first performance of the completed song with lyrics and vocals sung by frontman Maynard James Keenan.

"Descending" and "Invincible" are both expected to appear on TOOL's long-awaited follow-up to 2006's "10,000 Days" album, which will tentatively arrive this summer.

Drummer Danny Carey told The Pulse Of Radio a while back that the band usually figures out how to play its new songs live after recording them. "We've never been fortunate enough to perform our material live before we recorded it, so some of the songs we almost actually had to learn how to play live, you know, before we went out, and that was interesting," he said. "It always is, though. We've kind of stuck to the similar processes along the way, so we're used to it."

Welcome To Rockville was the opening show of TOOL's latest U.S. tour, which will run through mid-May. A string of summer European festival appearances will follow.