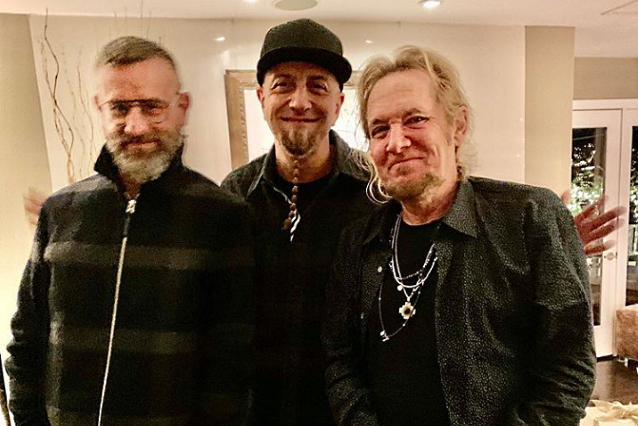 Shavo Odadjian (SYSTEM OF A DOWN), Adrian Smith (IRON MAIDEN) and Justin Chancellor (TOOL) came together for a jam Sunday night (December 29) at an undisclosed location, while celebrating the birthday of Smith's wife, Nathalie Dufresne-Smith.

Earlier today, Odadjian took to his Instagram to post a photo of the trio, along with the following caption: ""Had the pleasure of jamming with a couple of legends last night. @misteradriansmith from @ironmaiden and #justinchancellor from @toolmusic . What a great night. Until next time. #happybirthday @nathalie_d_smith ! #ironmaiden x #tool x #systemofadown"

Later in the day, he posted photos of the jam session, clarifying that Chancellor sat behind the drum kit, while he played bass and Smith took care of the guitar duties. He wrote: "What a fun night!"

IRON MAIDEN is rumored to have completed work on a new studio album. The British heavy metal legends haven't released any fresh music since 2015's "The Book Of Souls" LP, which was recorded in late 2014 in Paris, France with longtime producer Kevin "Caveman" Shirley.

MAIDEN recently announced nearly three dozen shows for next spring and summer as part of its acclaimed "Legacy Of The Beast" tour.

"Fear Inoculum" shifted approximately 270,000 equivalent album units in its first week of release, with 248,000 of those in traditional album sales.


Had the pleasure of jamming with a couple of legends last night. @misteradriansmith from @ironmaiden and #justinchancellor from @toolmusic . What a great night. Until next time. #happybirthday @nathalie_d_smith ! #ironmaiden x #tool x #systemofadown


Some more pics from last night. #justinchancellor on the drums, @misteradriansmith on guitar and yours truly on the bass. What a fun night! #ironmaiden x #systemofadown x #tool