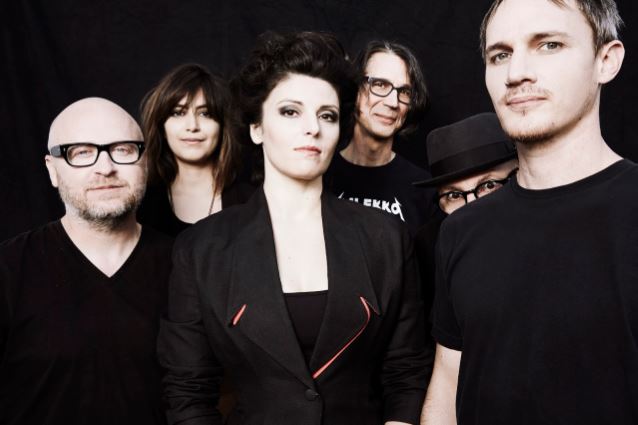 PUSCIFER, the Arizona-based electro-rock band fronted by TOOL's Maynard James Keenan, returns to the ring on March 17 as the band launches the "Money $hot - Round 2" tour, kicking off at the Fox Performing Arts Center in Riverside, California. Additional dates will be announced in early January.

Maynard James Keenan said of the live performance: "This show is so much more than just a band regurgitating songs. This is a multi-media performance unlike anything you’ve ever witnessed. There are those who know, and there are those who will know soon enough." Guitar player/producer Mat Mitchell added: "'Round 1' was a blast for us. Looking forward to more bone-breaking fun in 'Round 2'!"

PUSCIFER kicked off the "Money $hot – Round 1" tour the day after the release of "Money $hot", playing the Monster Mash festival on November 1 with the next six weeks spent trekking from coast-to-coast presenting sold out performances that marry the concept of concert and theater. The Kansas City Star, in a live review, said: "Not much emerges from the music world these days that feels genuinely unique, but PUSCIFER's 'Money $hot' tour qualifies. Each component of the show was first-rate: the sound mix, the videos, the musical performance and the theatrics. It all added up to a show that was as memorable as it was unique."

"Money $hot" was released on October 30 via Keenan's Puscifer Entertainment. The album landed at #1 on Billboard's Independent Music chart, #2 on the Alternative Albums chart and #30 on the Top 200. In a four-star review, Revolver magazine described the album as "a meditative and hypnotic — not to mention wholly engaging — offering" and both Crave and Kerrang! placed the release on their year-end, best-of lists, with Crave saying: "The yin and yang of masculine and feminine energy interweave a pulsing eroticism that curls itself around the mind like one of Keenan's many grapevines."

LUCHAFER open on all dates.

Tickets are on-sale on Wednesday, December23, with VIP packages available simultaneously at this location.