Arizona Stronghold Vineyard vintners Maynard James Keenan (frontman for TOOL and PUSCIFER) and Eric Glomski will host, in conjunction with Whole Foods Market, four bottle signings in Texas this month kicking off with a March 23 date at Whole Foods in Plano (Dallas).

The announcement comes on the heels of completing over two dozen highly successful bottle signings over the latter half of 2008 and early 2009 at Whole Foods locations in California, Colorado, Nevada, New Mexico and Arizona.

Dates and locations for the signings are:

According to The Pulse of Radio, a documentary about the efforts of Maynard James Keenan and his partner Eric Glomski to establish a wine-making industry in Arizona's Verde Valley is about to go into production. According to Keenan's publicist, the film will be co-directed by Christopher Pomerenke and Ryan Page, the same team that made the acclaimed music documentaries "Moog" and "The Heart Is A Drum Machine". The movie will showcase the "unusual and often metaphysical " location of the business, described by Keenan as "thick, dense, rich, complex, engaging and spiritual," while also profiling the mysterious singer and his wine-making partner.

Keenan and Glomski started their business in a region not necessarily known as conducive to making wine. Keenan told The Pulse of Radio what the success of the project has meant to him. "It's confirmation that, you know, as an artist you can create," he said. "It doesn't really matter what forum, as long as you have enough focus and drive and you're a quick study. To be a decent musician or an actor, you have to have some kind of sense of the subtle, and I think making wine, that's absolutely crucial. You have to notice the nuances and be able to predict the changes and navigate things without panicking."

The pair have been guests on Wine Library TV and have toured Whole Foods supermarkets on the West Coast for bottle signing events.

The documentary will be filmed throughout this year, with a 2010 release expected. The title is yet to be announced. 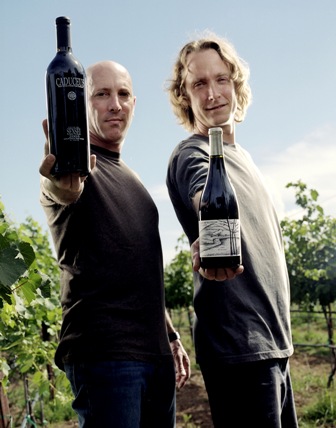