In his 29-year career, Tony MacAlpine has redefined instrumental hard rock, jazz-fusion and heavy metal for a generation of progressive-minded music fanatics. Whether it's been as a solo artist, or with the progressive supergroup PSMS (with Mike Portnoy, Billy Sheehan and Derek Sherinian); the mind-bending metal fusion band PLANET X (with Derek Sherinian and Virgil Donati); the Grammy-nominated jazz-fusion group CAB; or in the band of another guitar hero Steve Vai, MacAlpine has continued to evolve and set the bar exceedingly high.

"Aquiles is an incredibly gifted and dynamic drummer," says MacAlpine. "I truly enjoyed recording 'Concrete Gardens' with him, and of course touring with him since 2012."

"Jeff has inspired so many of us over the years with his brilliant and unique style," enthuses Tony. "The solo trade with him on 'Square Circles' was purely magical, both in the studio and live on EMGtv."

"It was a great experience to work with an engineer who knows exactly what I want, and exactly how to get it done — and Adair did it effortlessly," says MacAlpine, "and Seva is a warm, kind, perfectionist who masters in a very organic way. He was my number one choice for mastering my new music."

"My music is instrumental guitar-oriented heavy rock with a fusion flair," he explains. "Having started with classical piano since the age of five, I've been exposed to many genres and styles from contemporary to the romantic and classical periods. This early development helped me define my writing and improvisation which is evident in my sound today. My guitar playing encompasses many different styles, with an emphasis on composition and theater."

As with any true artist, change is the only constant. As he says, "I'm 29 years into my career as a musician, and my sound and artistic output has continually evolved, because I'm always striving to discover new ways to express myself through the music."

"Concrete Gardens" will be available in both standard and special edition versions — the special edition version includes a bonus DVD of Tony and band performing the album live at EMGtv. Featured is Aquiles Priester (drums), Pete Griffin (bass) and Nili Brosh (guitar), plus a special appearance by Jeff Loomis.

Tony will hit the road for dates in the U.S. in late May through June, before heading to Asia in July, and Europe in October. 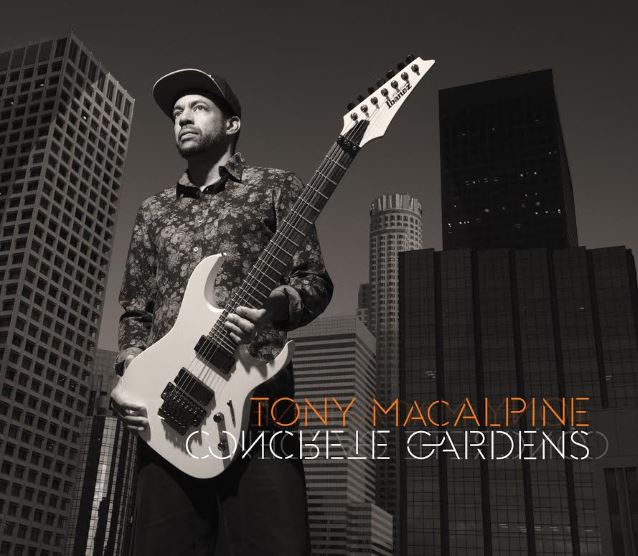