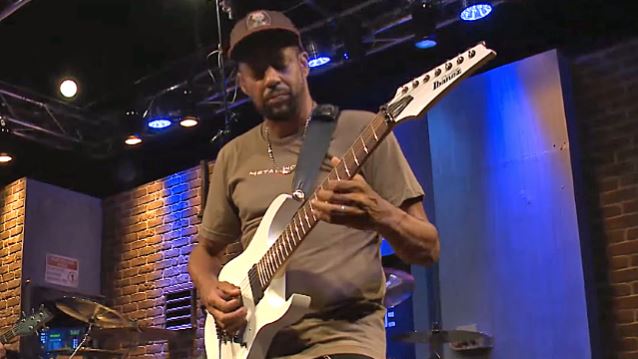 Tony MacAlpine says "all is well in medical land" after he was diagnosed with colon cancer last year.

The acclaimed guitarist will embark on of tour of the West Coast of the U.S., including playing several shows as the support act for Steve Vai's "Passion And Warfare" 25th-anniversary tour.

MacAlpine says: "It's been a while since I have reached out to you, but now the good fortune of health and timing is allowing me to do so.

"I have been feeling back to normal and tests indicate that all is well in medical land. Deep and sincere thanks to you all for your wonderful support through this very difficult last 12 months.

"I will be playing a run of U.S. West Coast shows in October with my trio of drummer Aquiles Priester and bassist Bjorn Englen. There will be some solo and headline shows, and some very cool shows supporting Steve Vai.

"We are looking forward to seeing you at the shows. I will be playing some carefully selected material from my repertoire. The band and I are very anxious to play for even more of you around the world in the next 12 months."

MacAlpine previously said he would be in the studio throughout August and September working on another instrumental record. No further details have yet been revealed.

Tony MacAlpine is widely known as a guitar virtuoso who is just as skilled on the keys. "Edge Of Insanity", his classic debut album, was ranked by Guitar World magazine as one of the Top Ten Shred Guitar Albums of all time. Aside from his solo work, Tony has also been part of several rock supergroups including PLANET X with Derek Sherinian and Virgil Donati; PSMS (Portnoy, Sheehan, MacAlpine, Sherinian); as well as the Grammy-nominated CAB with bassist Bunny Brunel and drummer Dennis Chambers. MacAlpine also spent seven years playing guitar and keys in Steve Vai's touring band THE BREED.

Tony's most recent album, "Concrete Gardens", was released in May 2015. Tony toured the U.S. in June 2015 to promote the album, but was forced to cancel tours of Asia, Australia and Europe when his health deteriorated.