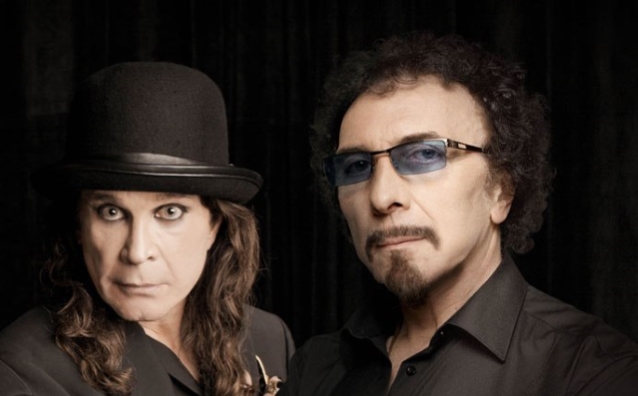 Tony Iommi has wished Ozzy Osbourne a "speedy recovery" after the BLACK SABBATH singer was hospitalized because of flu complications.

Earlier this week, Ozzy was admitted to the Keck Hospital of University of Southern California. His wife and manager, Sharon Osbourne, said that doctors believe "this is the best way to get him on a quicker road to recovery."

On Thursday (February 7), Iommi — who co-founded SABBATH with Osbourne, bassist Geezer Butler and drummer Bill Ward — took to his Twitter to write: "I'm wishing @OzzyOsbourne a speedy recovery and I know he'll be gutted that he's had to cancel part of his tour but I'm sure he'll be back on stage as soon as he's able. Get better soon my friend. Lots of love Oz, Tony x"

Ozzy reportedly checked into the hospital on Monday (February 4). Sharon and the couple's son Jack showed up at the hospital with security in tow. Sharon later left and returned a short time later with a suitcase and a blanket — a possible sign that she planned to stay by Ozzy's side.

Sharon apparently skipped Tuesday's (February 5) episode of her TV show "The Talk" so that she could care for her husband. This is Ozzy's second stay in the hospital. Last October, the metal legend contracted a staph infection that required him to have surgery on his hand and resulted in him canceling several shows.

Last month, Ozzy was forced to postpone the entire European leg of his "No More Tours 2" run on doctors' orders, just one day after postponing the first four dates on the U.K. stretch of the trek. Ozzy was diagnosed with a severe upper respiratory infection which his doctor felt could develop into pneumonia if he stayed on the road.

Ozzy said in some of his recent interviews that his last tour with BLACK SABBATH — the band's farewell trek which ended in February 2017 — was not a pleasant experience for him. He also revealed that he didn't particularly enjoy collaborating with Iommi even though he appreciates the BLACK SABBATH guitarist on a personal level. "Do I like working with him? Not really. Do I like him as a person? Yeah, I love him as a person," Osbourne told The Times in a new intervew. "But if people was to say to me, 'Was there a leader of BLACK SABBATH?' I'd have to say it was Tony Iommi, because without his guitar riffs, we'd be still sitting in fucking rehearsal with our thumbs up our arses going, 'What do we do now?'"

Osbourne also claimed that he has "moved on" from the band, and compared his relationship to the rest of SABBATH on their recent tour to reconnecting with a former girlfriend after several decades.

"I'll tell you what it was like. It's like when you're younger and you met a girl, Susie, and you break up and you don't see her for 30 years," he said. "Then she's in town and you go, 'Oh, I'll give Susie a call,' because your memory only remembers the good parts and you can narrow it then to a week and you go, 'I remember that week and it was lovely.' But then you go back and you go, 'I forgot the fucking four and three-quarter years I was fucking miserable.'"

I’m wishing @OzzyOsbourne a speedy recovery and I know he’ll be gutted that he’s had to cancel part of his tour but I’m sure he’ll be back on stage as soon as he’s able.