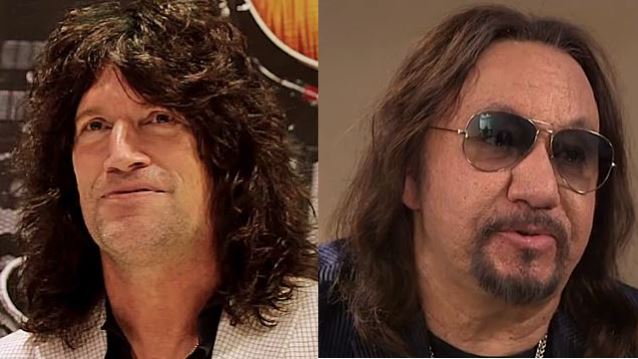 Guitarist Tommy Thayer, who joined KISS in February 2003, stepping into the boots the band's original axeman, Ace Frehley, had been occupying for the KISS reunion that lasted from 1996 to 2002, has refused to criticize his predecessor, insisting in a new interview that he wishes "all the best to everybody."

But Thayer has declined to fire back at Frehley, telling Australia's The Herald: "I don't want to get into a back-and-forth, but I'm sure you can kind of assess what you think when you hear all that."

During an interview for VH1 Classic "That Metal Show" co-host Eddie Trunk's podcast, "Eddie Trunk Podcast", Ace — who claims that he has "never seen KISS perform" without him and vows that he "never will" ("I've looked at videos on YouTube, and that lasted about 15 seconds," he admitted) — was asked what his "evaluation" is of Tommy "dressed as [Ace]" and "doing [Ace's] thing." He responded: "[Tommy is] not Ace Frehley by any stretch of the imagination, number one. Number two, what bothers me the most is that I know the new fans that KISS are getting don't know it. A lot of people that see Tommy up there think he's the original guy that created the makeup, that wrote great songs and wrote all those solos that he's performing, but he's not. He's just a guy up there copying me and trying to move like me and trying to sing like me and trying to play like me. And that's what bothers me the most. I mean, the real hardcore fans know. But the new fans, a lot of them don't know."

Asked what it was like performing with a version of KISS that had Eric Singer sitting behind the kit instead of the band's original drummer, Peter Criss, Ace said: "That was okay. I mean, Eric's such a solid drummer, he's a pleasure to play with, because you know the beat's always gonna be there."

Pressed on whether it was weird seeing someone other than Criss playing the drums for KISS, Ace said: "Well, you know, I don't see as good as I used to, so when I look back, I can't tell the difference. [Laughs] Just like a lot of fans don't know…"

Thayer told Rolling Stone magazine that he had no discomfort about wearing Ace Frehley's makeup. He explained: "First of all, I didn't have any input on that. That was a decision that those guys made. There was not even a conversation about it, because I think it was so obvious, that they weren't going to introduce new characters 30 years into the band. I never thought that there should be some new designs or something. I thought that would have been ridiculous. And the only thing is, you've got a lot of push-back from some of the diehards. And that's understandable. Hey, you know, if you lived in the Seventies and KISS was your favorite band, and that's what you grew up with, and suddenly there's another guy wearing that makeup, I can understand how some people, it might not have appealed to them as much. But as time as gone by, a lot of people have changed their mind."