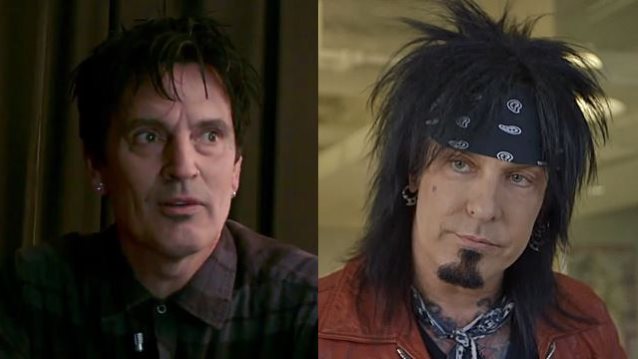 MÖTLEY CRÜE drummer Tommy Lee spoke to Rolling Stone about the band's final concert, which took place this past New Year's Eve at Staples Center in their hometown of Los Angeles, California, just 10 miles from the Sunset Strip where the group's infamous and decadent career first launched.

Asked what the band's preshow ritual was like and if it was different for the last-ever concert, Tommy said: "No. We just see each other up onstage and let it rip."

He added: "It's kind of strange, man. We're a fucking weird band. Even stranger, after the final night, we had a big party backstage on New Year's Eve, and I never saw the other guys. We never even said 'goodbye.' Fucking strange as hell, dude. I mean, what the fuck?

Asked why nobody would say goodbye to him, Tommy said: "I really don't know. I mean, if you're getting divorced, you still give your ex a hug, or flip her off or something. You either get a kiss or a slap, or ... something. Give me a sign! Let me know you're alive."

Tommy also confirmed that he hasn't spoken to MÖTLEY CRÜE bassist Nikki Sixx or singer Vince Neil since the show. "I think fucking Nikki unfollowed me on fucking Twitter, like, the next day," Tommy said. "I was like, 'Wow. Okay, dude.'"

Pressed on whether there was an issue with Nikki leading up to that, Tommy said: "There's always been issues."

Asked how feels about MÖTLEY CRÜE as a whole when he looks back on it, Tommy said: "I don't have ill feelings at all. I'm saying this with a smile on my face. I'm just happy to be part of something that was so impactful on so many people's lives musically and lifestyle-wise. That's pretty fucking insane, and I'm really happy that we decided to end it on a high note and not really drive this thing into the ground like so many of our other musical peers have. It's just really cool and quite an honor to kind of bow out when it's still larger-than-life. It could have gone a different route."

The "Mötley Crüe: The End" concert movie will screen in theaters June 14. The 140-minute film includes footage from the CRÜE's farewell show at the Staples Center along with "exclusive interviews and behind-the-scenes footage of the last week of the tour."