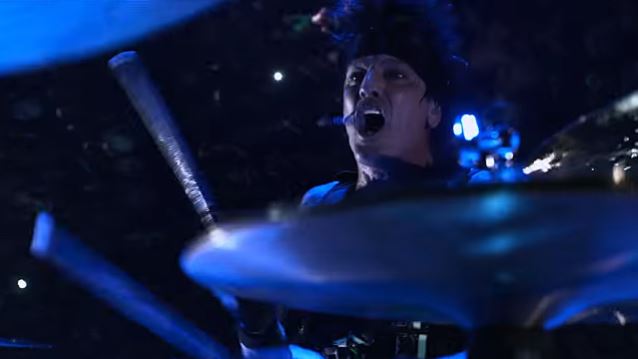 Despite the fact that MÖTLEY CRÜE members grew light years apart between their formation in January 1981 and their last-ever show on New Year's Eve 2015, drummer Tommy Lee tells Yahoo! Music that the group's last few months on the road went surprisingly smoothly. "Actually, that final tour was probably the nicest tour we've ever done together," he said. "And I think it's because everyone knew there was an end to it. And as functional or dysfunctional as it all is, there was a finish line. So people were actually being nice to each other and being cool. It was the coolest tour that we've done."

Lee also talked about the fact that his drum kit malfunctioned during MÖTLEY CRÜE's final concert, which took place at the Staples Center in Los Angeles, California.

Dubbed "The Crüecifly", Lee's drum stunt saw him bolted to a platform that moves on a roller coaster-type track near the arena ceiling, passing the band's inverted-pentagram lighting rig and spiked disco ball and spinning him 360 degrees vertically, rendering him upside-down.

During the New Year's Eve show, Lee's roller coaster left the rocker suspended upside down halfway through his performance. The drum kit was eventually set right and Lee climbed down the roller coaster. The kit was rolled back to the stage without Tommy, allowing the drummer to finish playing the show.

"You know what? It is Murphy's Law and just so typical for us," Tommy told Yahoo! Music. "I almost expected it, which is kind of odd to say. But how can the very last night go perfectly? And you know, the other two nights in L.A. went perfectly. But the last night it broke and I just started cracking up. Of fucking course it did. Why wouldn't it?"

He added: "We filmed all three nights [at Staples] and we were talking about not using that footage and using the shots from another night. And I said, 'Hell, no. That was New Year's Eve and that's how it went down.' I actually think it was fuckin' hilarious. And it's definitely in true MÖTLEY style. If it can go wrong, it'll go wrong."

Although Tommy admitted that it took him several months to really absorb the finality of MÖTLEY CRÜE's split, he insisted he doesn’t feel a sense of loss over the group's decision to call it quits. "I'm extremely happy to end it on a high note," he said. "Those memories will always stay with me. It's all good. There's no bummer about it whatsoever. And I have no regrets that the band is done."

MÖTLEY CRÜE's new concert film, "The End", will be screened in selected theaters on June 14, with a DVD release expected later. The 140-minute film includes footage from the CRÜE's farewell show along with "exclusive interviews and behind-the-scenes footage of the last week of the tour."