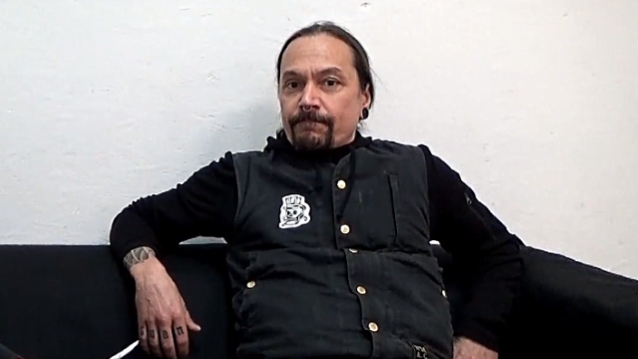 Tomi Joutsen says last year's "Queen Of Time" studio album is the "highlight" of his career thus far in AMORPHIS. Joutsen joined the Finnish melancholic progressive metallers in 2004 as replacement for Pasi Koskinen and has been widely credited for the band's subsequent career rebirth that started with his first AMORPHIS album, 2006's "Eclipse". The band's latest two studio albums, 2015's "Under The Red Cloud" and "Queen Of Time" have been particularly well received, enabling the band to play in territories it had not reached on previous tour cycles.

During an interview with Hungary's Impact metal channel, Joutsen spoke about the reception to "Queen Of Time" and AMORPHIS's recently completed European tour with SOILWORK and JINJER.

"I think this latest album ['Queen Of Time'], I think it's been kind of the biggest highlight in a way," Joutsen said. "Of course, the first show that I played with AMORPHIS was a big moment and the first record we did, 'Eclipse', it was a big thing and the first tours in Europe and the States, but I think with this album, we have made some success. Like, for example, this tour [with SOILWORK], there has been, I don't know how many sold-out shows already. It's not the first time, but this time — in Finland, for example, we played bigger venues and there were lots of sold-out shows there also. Something really good happened with this album. I can feel there's some kind of hype, if you can call it that. It's not like a hugely successful [thing]. I've been with the band for 14 years, and now I feel like something big might happen in the future."

Joutsen was also asked where he thinks AMORPHIS's strongest fanbase resides. "I think the Germany area is the strongest," he responded. "Of course, Finland. But Europe in general is maybe the biggest because of all the best venues for us are in Europe. We have played now a couple of times in the States. We had a break there. I think there was an eight-year gap or something, but now we have a couple of tours there and it's getting better. I think the biggest fanbase is in Europe, but we are really open-minded when it comes to what places to play. We have also played in Australia and Japan and China. Now we're going to have a two-week tour in Russia, too. We haven't played Africa, I think, but it would be cool to go there, if asked."

"Queen Of Time" was released last May via Nuclear Blast. The follow-up to 2015's "Under The Red Cloud" includes the use of real strings, flutes, orchestral arrangements and even choirs. In addition, this is the first time that people are able to hear AMORPHIS lyricist Pekka Kainulainen on the album, as he contributes a speech in Finnish.