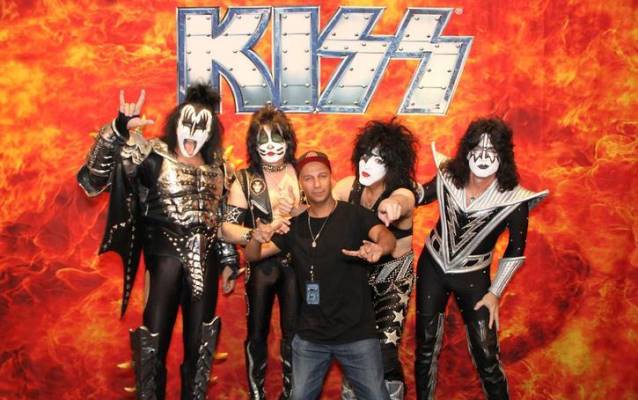 RAGE AGAINST THE MACHINE guitarist Tom Morello will induct KISS into the Rock And Roll Hall Of Fame on April 10 at the Barclays Center in Brooklyn, New York. Joining KISS in the 2014 class of inductees are Peter Gabriel, HALL & OATES, Linda Rondstadt and Cat Stevens, while the E STREET BAND (Bruce Springsteen's backing group) will be given the Award For Musical Excellence.

KISS leaders Gene Simmons and Paul Stanley have refused to perform with fellow co-founding members Ace Frehley and Peter Criss at the induction ceremony, unless the current members of KISS can also perform.

Current KISS members Tommy Thayer and Eric Singer will not be inducted along with the band's original lineup, a decision by the Rock Hall which has angered Simmons and Stanley.

2013 marked the second consecutive year where members of the public were invited to vote alongside the artists, historians and music industry insiders that make up the Hall Of Fame's voting body.

Voting ended on December 10, 2013 on RollingStone.com, with the Top Five acts compiled from those votes onto a "fan's ballot" that counted as one of the more than 600 total ballots turned in.

Gene Simmons has often been the first to credit KISS' legions of fans for their success and admits that the love and support the band has been given by their "Kiss Army" remains beyond their wildest imaginations. "KISS fans are beyond anything we ever dared hope for, in terms of fans," he said. "We were gonna be happy with just being able to sell a record and, and doing our music, but to get this kind of loyalty is beyond anything we ever expected."

Last year marked the first appearance of NIRVANA on the ballot.

NIRVANA was the only act last year to land on the ballot in its first year of eligibility.

KISS was previously nominated in 2010, while DEEP PURPLE got their first chance in 2012. Both were seen as glaring hard rock omissions equal to that of RUSH, who were finally inducted with the class of 2013 after years of fan outcries.

The television broadcast of the 29th annual Rock And Roll Hall Of Fame induction ceremony will premiere on HBO on May 31.