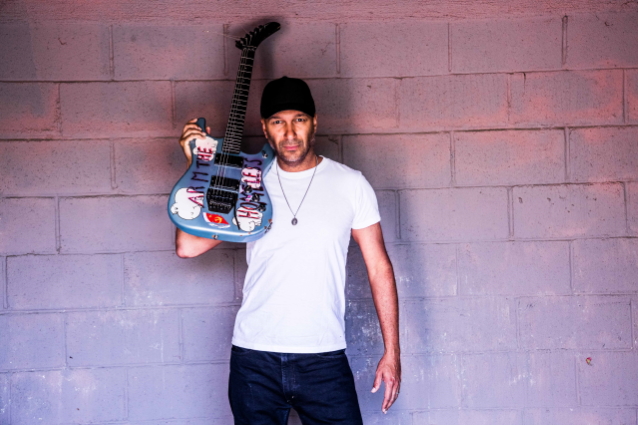 RAGE AGAINST THE MACHINE guitarist Tom Morello was the guest on the debut episode of the "Tuna On Toast With Stryker" podcast. During his appearance, Morello offered up some high praise for JANE'S ADDICTION, declaring that the Perry Farrell-fronted group "redeemed hard rock and metal music."

The future RAGE AGAINST THE MACHINE rocker was floored by what JANE'S ADDICTION brought to the table. "They were it," he declared. "Because what they did — along with a couple other bands, I'd credit SOUNDGARDEN and LIVING COLOUR on sort of a short list — is they redeemed hard rock and metal music. All of us who loved hard rock music but were somewhat embarrassed by the devil stuff and the groupie stuff and that, all of a sudden there were bands that were kicking my ass just as hard, just as hard as [BLACK] SABBATH and AC/DC and LED ZEPPELIN, but there was like an artistic and intellectual content and a poetic content to it. And so I was all in on JANE'S."

"The lights go down, the crowd roars, and out on stage comes me in a Dave Navarro wig," Morello explained. His band would get though roughly half a song before the real JANE'S ADDICTION came out.

"Tuna On Toast" is the brand new podcast launched by radio host Ted Stryker, best known for his 20-plus years on KROQ in Los Angeles. Every week, Stryker will be welcoming some of rock's biggest names into his home for conversations about their life and career. Upcoming episodes will feature Mike Shinoda (LINKIN PARK), M. Shadows (AVENGED SEVENFOLD) and Finneas (solo artist/producer for Billie Eilish).