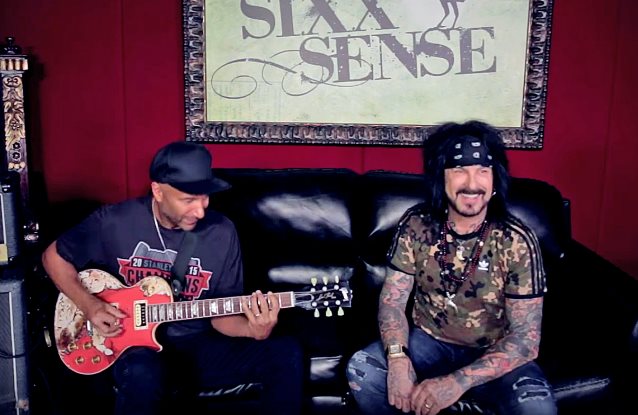 RAGE AGAINST THE MACHINE and PROPHETS OF RAGE guitarist Tom Morello is featured in the second episode of MÖTLEY CRÜE bassist Nikki Sixx's new original video series, "My Favorite Riff With Nikki Sixx".

Known for blending genres and manipulating the guitar into producing sounds never before heard in rock, Tom breaks down how he developed his one-of-a-kind voice using the toggle switch to emulate tones heard in PUBLIC ENEMY, Dr. Dre and CRYSTAL METHOD.

In "My Favorite Riff With Nikki Sixx", Nikki sits down with some of the world's greatest guitar and bass players, along with future stars, to talk about music, gear, and most importantly, riffs. Think of it as "Comedians In Cars Getting Coffee" but with rock stars!

Morello told The Pulse Of Radio that making an album was a natural evolution for the supergroup, which also consists of fellow RAGE members Tim Commerford on bass and Brad Wilk on drums, along with Chuck D and CYPRESS HILL's B-Real on the mic. "You know, it was a great chemistry that we felt onstage during the 'Make America Rage Again' tour, and we wrote ten songs in the first two weeks we were playing together," he said. "You know, and then a month in the studio with, at Henson Studios with Brendan O'Brien, and it was so exciting, so fun — it's the most collaborative and fun band record that I've been involved in since the first RAGE record."

The group made their live debut in May 2016 in Los Angeles. They next play at the Louder Than Life festival in Louisville, Kentucky on October 1.