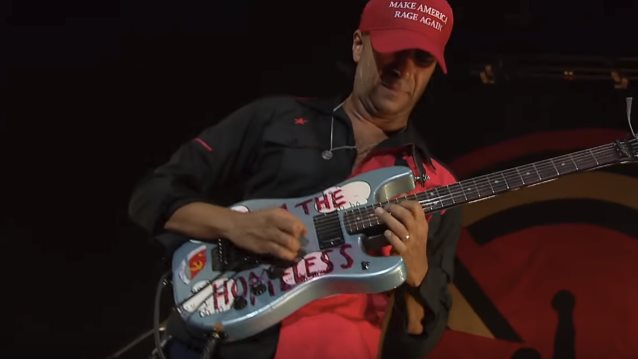 Chris Cornell's AUDIOSLAVE bandmate Tom Morello has dismissed conspiracy theories that have surfaced since the singer committed suicide in May following a SOUNDGARDEN show in Detroit.

Speaking with Eric Blair of "The Blairing Out With Eric Blair Show" at the October 6 "Bowl For Ronnie" event in Studio City, California, the RAGE AGAINST THE MACHINE and PROPHETS OF RAGE guitarist said that he's had a "horrible" time dealing with the passing of Cornell, whom he called "a close friend," "a great artist" and "one of the greatest rock singers of all time."

When AUDIOSLAVE reunited for a brief three-song set last January, Morello saw no signs of depression in Cornell. "He was great — he was fantastic," Tom said. "He loved his life, he loved his family, he loved music, and it's a tragedy."

Tom went on to discount the rash of theories about Chris's death that have surfaced online, saying that "the only sinister hand [at work in his passing] was his lifelong addiction that finally caught up with him."

Morello recently revealed the existence of unreleased AUDIOSLAVE music from the sessions for the three studio albums the band released. But he told The Pulse Of Radio that at this point he doesn't know what will happen with it. "You know, we recorded music for AUDIOSLAVE records, and then we recorded more songs than made those records, and I'm certain at some point it will come out but there's no plans for it. We had talked about it when, you know, Chris was alive and we thought at some point there will be the right time to put it out. Now I don't know that there's ever a right time to put it out, but there's no reason that it shouldn't come out at some point."

Morello, AUDIOSLAVE bassist Tim Commerford and AUDIOSLAVE drummer Brad Wilk — who were also bandmates in RAGE AGAINST THE MACHINE — are now in PROPHETS OF RAGE, who released their debut LP in September.

Cornell recorded three studio efforts and one live album with AUDIOSLAVE from 2002 to 2007 before leaving the group.