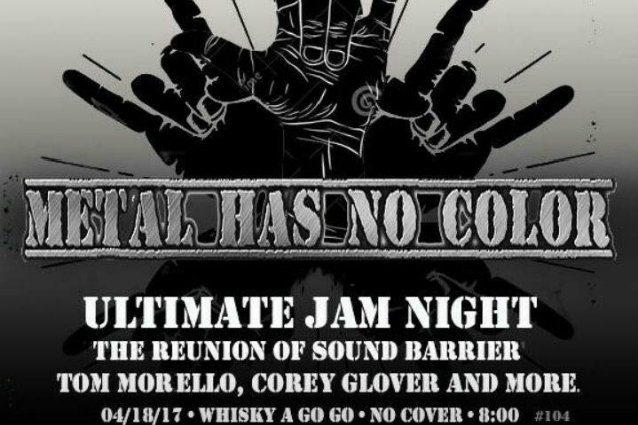 In an effort to combat national divisiveness, Ultimate Jam Night at the Whisky A Go Go in West Hollywood, California will present "Metal Has No Color", a unique night of strength among rock musicians to demonstrate how our nation can unify. The April 18 show will feature the reunion of seminal African-American metal band SOUND BARRIER and the debut of its new release produced by Tom Morello. Additional artists include Corey Glover of LIVING COLOUR, Doug Pinnick of KING'S X, and Doc Coyle of GOD FORDBID. They will be joined by more than 40 top musicians of various ethnicities. Doors open at 8 p.m. The event will be broadcast worldwide via Zinna.TV.

SOUND BARRIER is a pioneering all-black heavy metal band that was formed in 1980. Facing racism for their choice in music among both the black and white communities, the band persevered through extreme hatred to create music that influenced generations of metal and rock artists, including Morello. Led by vocalist Bernie Kimbell, guitarist Tracy "Spacey T" Singleton, bassist Stanley E., and drummer Dave Brown, the band produced songs that appeared on MTV and radio that resulted in other black musicians being given permission to enter the genre. For their April 18 performance, the band will perform its first new music in over thirty years, produced by Morello, with Eric Valentine (Randy Jackson, Erykah Badu, Steve Vai, Steve Lukather) on drums in place of Dave Brown, who passed away in 2013.

Corey Glover is the lead singer for LIVING COLOUR, and a noted actor with performances in the acclaimed Oliver Stone film "Platoon", as well as a headlining role in the musical "Jesus Christ Superstar". In 1989 LIVING COLOUR received the Grammy for "Best Hard Rock Performance" for their iconic hit "Cult Of Personality".

"These days our nation is more divided than ever," said Ultimate Jam Night founder Chuck Wright. "States are separated into 'red' or 'blue,' and people are increasingly combative. The idea of being 're-accomodated' shouldn’t exist because individual civility should be cherished. We believe it's high time for people to come together, and music has always held great healing power. We're proud that Ultimate Jam Night can continue to demonstrate how race and separation can be set aside for common understanding and joy."

Admission to show is free.