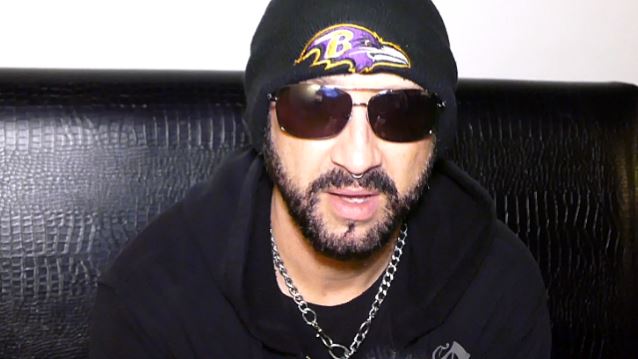 Actor Vinnie Langdon of the "Vinnie Langdon Show" recently conducted an interview with HELLYEAH guitarist Tom Maxwell. You can now watch the chat below.

Asked about HELLYEAH's decision to work with Las Vegas-based producer Kevin Churko (FIVE FINGER DEATH PUNCH, IN THIS MOMENT, PAPA ROACH) on the band's new album, "Blood For Blood", Tom said: "I think we really needed to go outside the box. We were a self-produced band, and, granted, I think we did a pretty fine job at doing it. But it's hard to be a little analytical of your own stuff. You know what I mean?! You're too close to it. So when the opportunity came for us to work with Kevin, none of us had ever met him, or anything, but we knew what his body of work was. And it was that extra ingredient that we really needed to fine-tune the band and harness the things that we weren't harnessing. And he did a fantastic job. In fact, I really don't wanna work with any other guy, down the road or when it comes down to doing music and recording; that's the guy I wanna go with."

Maxwell also spoke about the change in the songwriting process for "Blood For Blood" compared to that on HELLYEAH's earlier efforts. He said: "The record came out exactly the way I envisioned. It was a process to make this record — we parted ways with a couple of dudes; Greg [Tribbett, guitar] and Bob] ['Zilla' Kahaha, bass] — so it was primarily left just to myself and Chad [Gray, vocals] and Vinnie [Paul Abbott, drums] just to write it and do the whole record. And it came out fantastic. We're really happy. Front to back, every song, there's not one song that's 'fast forward to the next one.' You know what I mean?!"

He continued: "I think we really needed to dig deep on this one. I really wanted to break that stereotype people had us in of this 'party-rock' band, which kind of put us in a corner — songs like 'Alcohaulin' Ass', 'Drink Drank Drunk' and 'Hell Of A Time'. I mean, they're cool tunes, but, personally, I don't have really any history with that kind of music. I'm a hardcore kid from Baltimore and I wanna play real moody, emotional, heavy stuff and more relaxed, pulled-back stuff, but retaining integrity and honesty, and I just didn't think that that was the way that we should be going. So I looked at it as a blessing. We were, like, 'All right, dude, you're gonna write all this music. It's gonna fall in your lap.' And I'm, like, 'All right. Well, this is where we're going.' 'Blood For Blood' came out great. 'Moth' is burning it up out there and people are digging it. So it's good stuff."

"Blood For Blood" was HELLYEAH's first album since parting ways with Tribbett and Kahaha in February 2014.