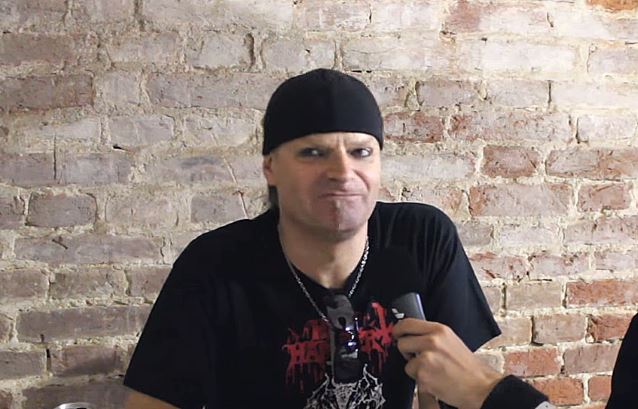 Metalshop TV conducted an interview with former HELLHAMMER/CELTIC FROST and current TRIPTYKON singer, guitarist, and main songwriter Tom Gabriel Fischer (a.k.a. Tom Gabriel Warrior) on August 5 at the Brutal Assault festival in Josefov, Czech Republic. You can now watch the chat below.

Speaking about how TRIPTYKON's dark and doomy music fits the "party vibe" of a festival atmosphere, Fischer said: "There's been occasions when the crowd at a festival was really in a party mood and we were probably a mismatched act on stage. That's happened, and that's fine. It's only natural. Our music is not really party music, is it? It's at times very melancholic, very gloomy, very dark. And that's the way it is; that's who we are, and we won't change. One hopes that the people who book the festivals take this into consideration when they approach the bands. Most of the times, it works perfectly — astonishingly good. At times, there's even such a connection between the crowd and us that it becomes almost like a mass, and I love that. But it's different from festival to festival, and also depending on the time when you're on the bill. We're lucky that we're [on stage] usually rather late. But, you know, it can be a touchy thing, yeah."

Asked if there has ever been a time when TRIPTYKON was received so poorly by a festival audience that he was on stage wondering what he was doing there, Fischer said: "It's happened in Sweden twice, yeah, which has made us very reluctant to accept another festival in Sweden. Because, for some reason, I guess the Swedish festival audience are not really prepared for TRIPTYKON, which is fine. I mean, it's their right; they can do whatever they damn well want. But in Sweden, yes, that's happened twice. In other countries, it's been exactly the opposite. I don't know why. I'm the last person to find an explanation for that… I guess there's not enough of an ABBA vibe in our music. Or maybe we should wear masks. Ah, no, that's not us."