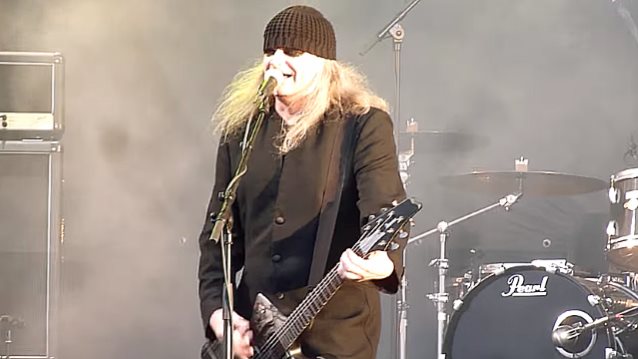 Metal Chris of DCHeavyMetal.com conducted an interview with former HELLHAMMER/CELTIC FROST and current TRIPTYKON singer, guitarist, and main songwriter Tom Gabriel Fischer (a.k.a. Tom Gabriel Warrior) late last month at the Maryland Deathfest XIII in Baltimore, Maryland. You can now listen to the 19-minute chat using the SoundCloud widget below.

Asked if he prefers playing older songs or he likes performing the TRIPTYKON stuff more, or whether it is all just kind of the same to him, Tom responded: "It's exactly the same to me. If I had my way, CELTIC FROST would have existed for many more albums. Unfortunately, certain people's grand designs on their own fame and certain egotistical stunts interfered with that. And, eventually, the band became so unworkable that I personally said the only option that was left was leaving it. I formed TRIPTYKON, but in essence, it's exactly the same thing I did with CELTIC FROST. It's simply minus the egotism and the personality stunts. Even though it's younger people, behind the scenes TRIPTYKON is far more mature than CELTIC FROST ever was. But musically, the whole infrastructure around the band, and my approach, and the way I produce and everything, it's exactly the same. It's basically what I would have done had CELTIC FROST persevered. So, to me, the CELTIC FROST songs merge perfectly with the TRIPTYKON songs. I really don't see a difference. We try to strike a balance, because TRIPTYKON is not just me, it's four people, and I don't just wanna be a CELTIC FROST cover band. I think it's fair enough to play half-half — half newer songs, half older songs — but I think we're doing fine like that.

Regarding the possibility of a CELTIC FROST reunion, Tom said: "I'm afraid that's impossible, yeah. I mean, there's no more animosity between me and Martin [Eric Ain, bass] — we just met, actually, a few weeks ago, as we do from time to time — but I think that window has closed. Even though Martin once said, 'Yeah, we'll play music together again,' but after that gargantuan disappointment, I don't think I wanna set myself up for yet another one. CELTIC FROST was my life, and losing that twice wasn't very easy. And I don't trust these people anymore. I invested so much time and so much of my personal money and effort and my songs and my production and everything into the 'Monotheist' album, and I did this because I believed the band could exist for many years. Then I felt betrayed and stabbed in the back. And I really… If I would ever get involved with that again, it would probably end the same, and I don't wanna do that. TRIPTYKON is a circle of friends, and I prefer that. And, you know, anything I wanna do creatively, I can do it in TRIPTYKON."

In a 2011 interview with BigMusicGeek.com, Tom was asked at what point he realized that his tenure with CELTIC FROST was once again coming to an end. "To be quite honest, I had sensed it for some time," he replied. "I just didn't want to admit it.

"CELTIC FROST was much more than just a band to me. It was my life, my ideology and pretty much represented my entire being. Of course, I didn't want to see it destroyed again, so despite having all the inside information, I tried to disrupt its destruction and probably stayed too long even though it was fairly obvious that I couldn't face the band. Actually, I blame the final drummer of CELTIC FROST for the destruction of the band. If Martin has any part of this, it's his inactivity that opened the door to this. He simply did not want to involve himself in anything negative, which, on one hand, is commendable, but on the other hand, it's simply not realistic in this world or within a band that works under pressure twenty four hours a day. You simply have to be a man and be involved, especially if certain personal conflicts threaten the whole band. Martin was initially reluctant to become involved and that basically opened the door for one person to let his ego run freely until there was really nothing left of the band."