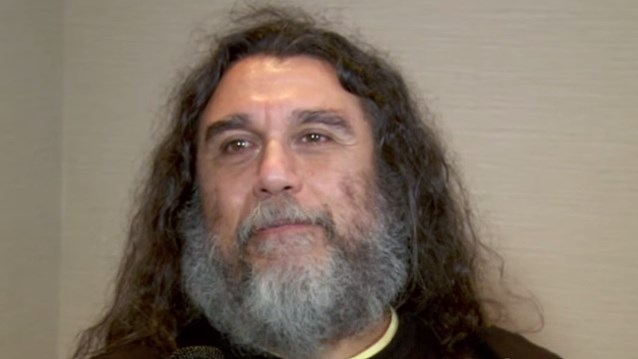 In a brand new interview with The Quietus, SLAYER bassist/vocalist Tom Araya was asked about how he feels about those zealous, rabid and über-passionate SLAYER fans who are notoriously rough on opening acts, chanting "Slay-er! Slay-er!" during their set.

"My view on SLAYER fans? Pretty fucking crazy," Araya said. "Pretty out there. Incredible fans. There have been a lot of situations where people will say, 'Tom, things are getting out of hand. You need to tell them to stop!' But there is absolutely no point in doing that because, no matter what you say from the stage, all they'll hear is, 'Do it again.' They don't hear what you're actually saying, they only hear what they wanna hear which is 'Do it more!' [Laughs] 'He likes what we're doing! Let's carry on doing it… but lets do it more!'"

He continued: "The best way to illustrate that would be when we did the Clash Of The Titans tour in the U.S. a while ago. We were playing in Washington and MEGADETH was headlining that night. On that particular tour, it was a revolving headline. We opened that night, ANTHRAX played after us and we were watching ANTHRAX and the crowd was throwing dirt — clumps of sod — at ANTHRAX. MEGADETH went on and it got worse. You could see it. It was at the amphitheatre in Chicago and they'd just laid out fresh sod — a whole new field of sod — and chunks of it were flying from the back to the front. People at the back seats would throw it to the front and it just got worse and worse. MEGADETH went on and they were getting pelted. They walked off and Dave [Mustaine, MEGADETH mainman] was pissed and you could tell that he was going to say something but we were all thinking, 'Oh, no. Don't do it, Dave, please… Bad mistake, bad mistake,' and he went out and got real mad at the audience and was yelling at them to stop what they were doing and they just started throwing more and more at him, y'know what I mean? [Laughs] That's just an audience though; that's how an audience reacts."

Araya added: "A SLAYER audience in that situation would just go overboard; it would be like that scene in the 'Life Of Brian' — you know, at the stoning. 'Don't start the stoning until I blow this whistle… even if he does say Jehovah.' 'He said it again, stone him!' and they end up throwing that massive tombstone over him, dropping it right on him! That would be the SLAYER audience reaction, right there. I would've drowned in the mud had I said anything. [Laughs]"

SLAYER's "Repentless" debuted at No. 4 on The Billboard 200, having shifted 50,000 equivalent album units in the week ending September 17.