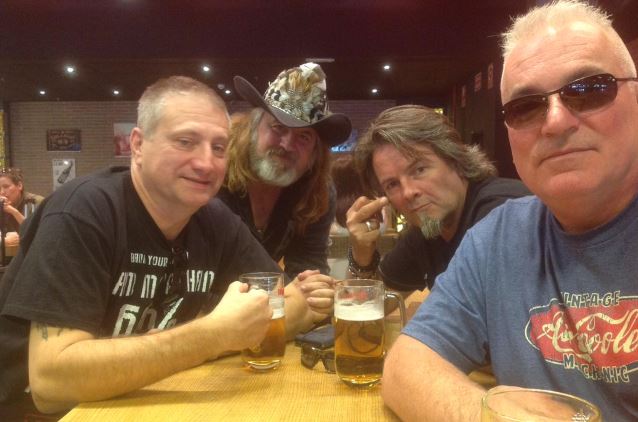 British classic metal band TOKYO BLADE has announced the return of not one, but two vocalists who have formed part of the group's lineup in previous years.

Vick Wright (1984-1985) and Chris Gillen (2008-2010) will rejoin the four original members Andy Boulton, Steve Pierce, John Wiggins and Andy Wrighton and perform alternate live shows depending on where in the world the band is playing.

Guitarist and founder member Andy Boulton explains: "Firstly, can I say that individually Chris and Vick are two of the best vocalists I've ever played with and two of the finest voices in rock full stop?

"It's been a pleasure to work with Chris again recently, and now to have Vick available to reunite a 'classic' lineup for the band is great for us and particularly the fans.

"'Night Of The Blade' is such a classic album and holds a place in everyone's heart so to be able to perform those songs again with Vick will be very special.

"Playing live is so important to us and over the past few years it's been difficult because most of the band is based in the U.K. and our vocalists have been in another country, so we've come up with the perfect solution. Chris lives in Michigan so can perform all shows in the U.S., Canada and South America and Vick will be based in the U.K. to do everything in Europe for the 'Night Of The Blade' reunion shows.

"It's a somewhat unique situation, but I'm sure the fans will jump at the chance to see the classic lineup again. At the end of the day everything we do is for the fans so it's such a joy to be able to do this."

Chris Gillen never recorded with TOKYO BLADE during his first tenure but toured with the lineup during 2008-2010 and performed with the band during 2015. His other band OVERLOADED has toured with the likes of ALTER BRIDGE, GODSMACK, HELLYEAH, DOPE, SKID ROW, SLAUGHTER and countless others

Vick Wright replaced original singer Alan Marsh in time to record vocals for the band's now-classic "Night Of The Blade" album in 1984 and its follow-up, "Black Hearts And Jaded Spades", before departing and moving to the U.S. where he's had a successful career as a musician, writer and film director. His band JOHNNY CRASH toured with MÖTLEY CRÜE and PRETTY MAIDS and at one time included former GUNS N' ROSES members Matt Sorum and Dizzy Reed. The award-winning supernatural thriller "To Hell With A Bullet", which Vick wrote and directed, was recently released in the U.S. and will be available in Europe soon.

Live dates in 2015 have been announced in Spain, Holland, Belgium, France and Germany, with more to follow. South American shows will take in Mexico, Brazil and Columbia, with final dates to be confirmed soon.