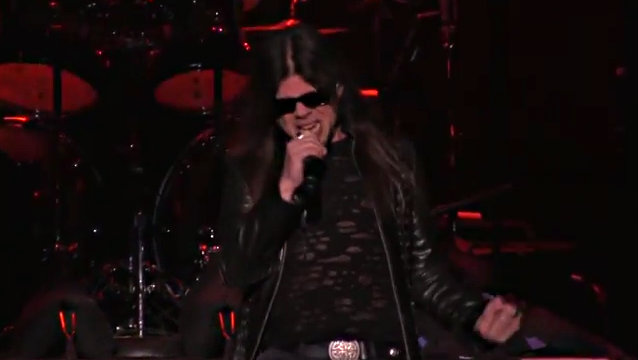 Video footage of the Todd La Torre-fronted version of QUEENSRŸCHE performing the song "Walk In The Shadows" on April 19 at at Wolf's Den at Mohegan Sun in Uncasville, Connecticut can be seen below. According to the band, the recording is a "raw board mix" with "no room/audience" microphones.

In what appears to be a preview of the upcoming settlement announcement over the rights to the QUEENSRŸCHE name, singer Geoff Tate's QUEENSRŸCHE webpage has changed. It no longer says "QUEENSRŸCHE" at the top and now features a banner with the words "Geoff Tate: The Voice Of QUEENSRŸCHE." In addition, there is a link to "QUEENSRŸCHE Without Geoff Tate" which points to QueensrycheOfficial.com, the official webpage of the Todd La Torre-fronted version of the band.

QUEENSRŸCHE guitarist Michael Wilton recently confirmed that Tate — who was fired from the Seattle progressive rock band in 2012 after fronting it for three decades — and his former bandmates have reached a settlement in their legal battle over the rights to the group's name.

Speaking to the Allentown Music Examiner, Wilton was asked when fans can expect a resolution of the legal case involving the two versions of QUEENSRŸCHE. "That's coming up," Wilton said. "What I can say is that both sides have reached an amicable settlement and it's now just a matter of time. There will be an official press release, but for now, you'll have to wait."

Wilton also revealed that the Todd La Torre-fronted version of QUEENSRŸCHE is continuing work on material for the follow-up to last year's self-titled effort. "We've already begun the process for the next album," he said. "We have probably six songs demoed so far. We're taking it in a direction suited to what we do as QUEENSRŸCHE but maybe a little more progressive and heavier. The thing is, you never know what you really have until it's complete. It's like carving a piece of clay and seeing how it turns out. You peel off the layers until you get to something really cool."