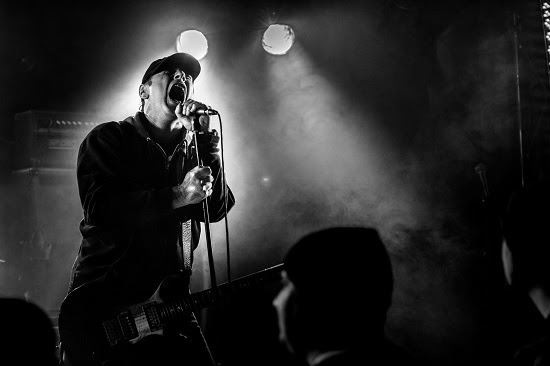 The End Records has announced the signing of TODAY IS THE DAY for the band's upcoming studio record and ten-album catalog. The group's new CD will be released in 2017 to coincide with TODAY IS THE DAY's 25th anniversary, and it will be followed by the catalog reissues, which feature exclusive, never-before seen and heard bonus material from the band's deep archives.

Currently in the studio are visionary frontman/founding member Steve Austin (vocals, guitars, keyboards), Trevor Thomas (bass), and Douglas Andrae (drums). From the studio, the album will be mastered by Maor Appelbaum (FAITH NO MORE's "Sol Invictus" and "We Care A Lot" reissue).

Asked about the new album sound, Austin described it as a "wide-open devastation of the human soul — a diary of un-filtered anger and emotion detailing the human experience and the struggle to survive."

The catalogue reissues fall on the 20th anniversary of TODAY IS THE DAY's seminal album "Temple Of The Morning Star". Austin says: "I am extremely psyched to be reissuing the TODAY IS THE DAY catalog with Andreas Katsambas, a longtime fan of the band. For the reissues, I searched my archives and pulled loads of photos, unreleased tracks, demos, and video to paint the rest of the picture. I wanna share a lot of those experiences, to hopefully expose a lot of the real life behind all my music."

TODAY IS THE DAY reigns as one of the most influential bands of the past two decades. The band's violent and anthemic style, which blends metal, noise, psychedelia, and rock, has won worldwide acclaim ever since the debut album, "Supernova", first hit in the early '90s. Ten studio albums have been released on such labels as Amphetamine Reptile, Relapse and Southern Lord — including modern-day classics like "Willpower", "Temple Of The Morning Star" and "In The Eyes Of God". The band's lineup has included such musicians as Brann Dailor and Bill Kelliher, who would later go on to form MASTODON. TODAY IS THE DAY has toured the world with MOTÖRHEAD, HELMET, MELVINS, MORBID ANGEL, CONVERGE, NAPALM DEATH, NEUROSIS, EYEHATEGOD, UNSANE, COALESCE, and many more. Steve Austin has made a name for himself as a producer, helping create seminal albums for LAMB OF GOD, CONVERGE, DEADGUY, among others.