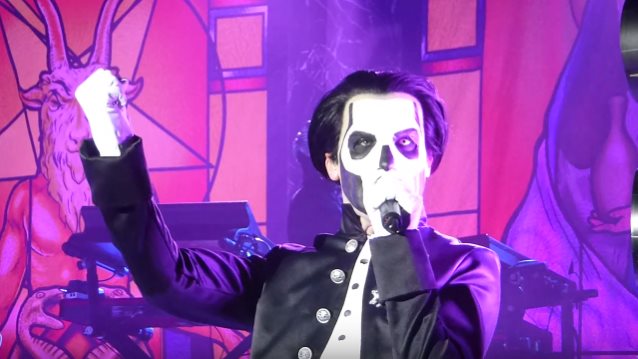 In a brand new interview with Albuquerque Journal, GHOST lead singer and founder Tobias Forge — who performs as Papa Emeritus and does the act's interviews disguised as a member of his backing band of Nameless Ghouls — spoke about the progress of the songwriting sessions for the group's follow-up to 2015's "Meliora" album, tentatively due early next year.

"I usually write a lot," Forge said. "I don't make an album and don't write for two years and then end up with a blank paper starting over."

He added: "I constantly work with material that could be two years old, five years old, ten years old, as well as new things. It's a pick and mix of a lot of different ideas and stuff laying around, a lot of new stuff being added to the pile. Yeah, it's a constant thinking ahead, and now, already now, I'm thinking about album No. 5, because there are songs coming out now or coming up being written that I feel like that won't fit into the new album, so I'll put that one on to the next one instead."

Regarding the lyrical themes covered on GHOST's next album, Forge said: "Having in mind that the previous record was about the absence of God or the absence of deities, this new one is going to be about the return of God. You know God's wrath cast upon the suffering humans, so it will be a little bit more biblical in that sense, which in turn makes it darker, a little bit more apocalyptic, I think. That's basically what I can tell you about it right now."

GHOST will enter the studio in mid-August to begin recording the new LP.

Forge said in April that he hoped to re-team with Swedish producer Klas Åhlund, who helmed "Meliora" and is a prolific songwriter, producer and guitarist. He is also a member of the Swedish rock band TEDDYBEARS.