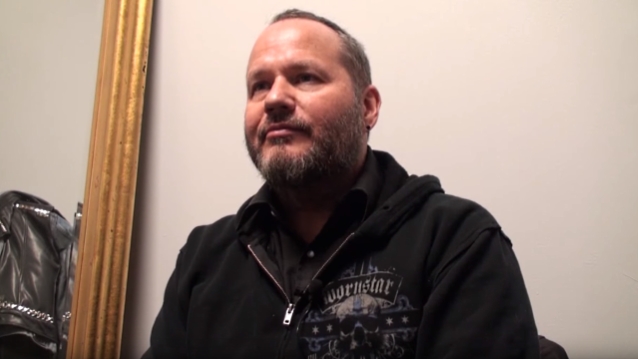 During a recent interview with All That Shreds, Downing said that "physically and technically," Ripper was "a better singer than Rob, because Tim was always in tune, he was always in key. I mean, Rob was good," the ex-JUDAS PRIEST guitarist added. "Rob got better after he started to wear in-ear monitors. But Tim was stronger. He still is. I mean, the guy is a powerhouse."

Asked by The Metal Voice in a new interview what he thinks about Downing's assessment of the two PRIEST vocalists, Owens said (see video below): "I don't agree. But it's flattering. Listen, I was in absolute top form when I was in JUDAS PRIEST. I get him complimenting me like that, just because I was probably at the top of my game. Plus, I was younger.

This past January, Owens praised Halford, saying that he has been impressed with Halford's performances on the "Firepower" tour.

"I think Rob's probably singing better now than he has in a long, long time," Tim said. "He sounds absolutely phenomenal. And it's great to hear some of these classic songs that he's singing on stage. That's a great thing… Like I said, Rob is singing so good now — he really is. And he looks good, and I think he feels good."

The Ohio-based singer recently told "Talking Metal" that JUDAS PRIEST's management requested that he stop using artwork related to his time with the group to promote his solo shows.

Earlier this year, Owens defended Downing over the comments the ex-PRIEST guitarist made about his former bandmates in his recently released autobiography, explaining that K.K. is "just telling the truth."

Owens currently tours the world as a solo artist and performs as the lead singer of several bands, including SPIRITS OF FIRE, CHARRED WALLS OF THE DAMNED, A NEW REVENGE, DIO DISCIPLES and THE THREE TREMORS. Additionally, the movie "Rock Star" (Mark Wahlberg, Jennifer Aniston) was loosely based on Owens's time in JUDAS PRIEST.