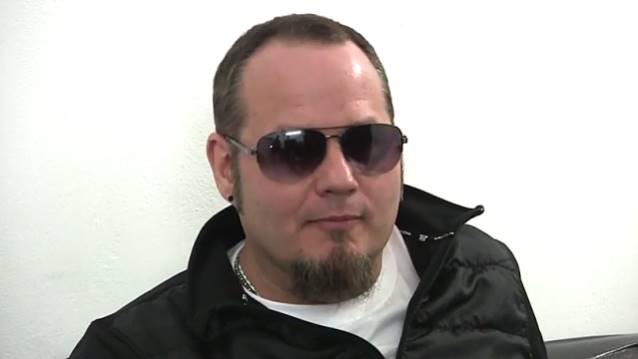 Asked how much of the 2001 Warner Bros. movie "Rock Star", starring Mark Wahlberg as a salesman-turned-rock star, was styled after Owens, who fronted a JUDAS PRIEST cover band before being tapped to become the new lead singer of the actual group, Tim said: "When they first [got the idea to do] the 'Rock Star' movie [under its original name 'Metal God'], it was really gonna be about me. And then JUDAS PRIEST pulled away from it, because they didn't like some things. So [the producers] really made their own movie, I think. The similarities were that I auditioned for JUDAS PRIEST and I sang one line of a song and hit a note and made the band. But then a lot of the things, they kind of went out… I mean, I wasn't that kind of fan when I made the band, because I was that kind of crazy kid in high school in the '80s. But this was 1996, so I wasn't living at my parents' with posters on the walls. I mean, it was still pretty cool. I mean, to have a movie loosely based on you is pretty cool."

Regarding whether it was ironic that the "Rock Star" movie became almost prophetic in the sense that Mark Wahlberg's character in the film ends up playing small clubs with his own material after the band's original lead singer rejoins the group, Owens said: "For me, the movie was almost [like real life]. Rob [Halford] came back [to JUDAS PRIEST], which was good for me, to be honest. My career, I went on to do a lot of stuff. It was better for the band, it was better for Rob. So it was kind of funny. I think I became a little bit bigger than the coffee shop singer that Mark Wahlberg was in the movie in the end, just playing there. I still get to play in front of thousands of people in Russia. But it is similar how he went on to do his own thing."

Owens also spoke about the progress of the recording sessions for the debut album from PROJECT ROCK, which also features Keri Kelli (SLASH'S SNAKEPIT, ALICE COOPER, RATT) on guitar, Simon Wright (DIO, AC/DC, UFO, DIO DISCIPLES, Geoff Tate's QUEENSRŸCHE) on drums, Rudy Sarzo (OZZY OSBOURNE, QUIET RIOT, WHITESNAKE, DIO) on bass and Teddy "Zig Zag" Andreadis (GUNS N' ROSES) on keyboards. "I just finished the vocals," he said. "I flew from L.A. — I was in the studio with Keri — I flew directly here. The vocals are done. It's almost done. Probably, like, a September release, maybe. But it's gonna be great. We're really looking forward to it. Keri and I busted our butts on it, especially Keri."

In a 2012 interview with Loud magazine, Owens stated about his departure from JUDAS PRIEST: "Well, you know, we all knew that Rob would come back eventually. That was a given. I love the guys in PRIEST, and if there's anything where I look back and wish, 'Oh man I wish it could have worked out,' that would probably be it. I was glad to see Rob come back, [but] I do wish they would play some of my material when they're out there [on the road]."

Owens recorded two studio albums with JUDAS PRIEST — 1997's "Jugulator" and 2001's "Demolition" — before the band reunited with Halford in 2003. 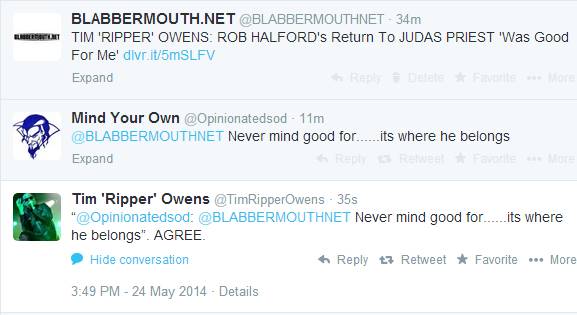