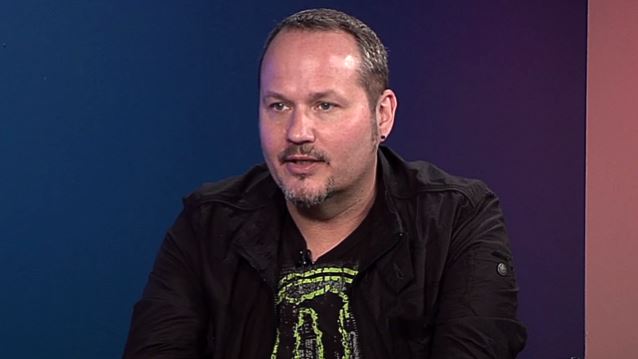 Former JUDAS PRIEST and ICED EARTH singer Tim "Ripper" Owens and his business partner, Micah Posten, with whom he owns Ripper's Rock House, "a rockin' sports eatery" in Akron, Ohio, were interviewed on a recent edition of "Akron Buzz" with host Tim Daugherty. You can now watch video footage of their appearance below.

Speaking about how he landed the JUDAS PRIEST frontman gig nearly 20 years ago, Owens said: "It's a lot of luck, first of all. They found a video tape — which, that does date me a little bit, 'cause it was a video tape; it wasn't YouTube or anything like that. But they got a video tape of me singing in a JUDAS PRIEST tribute band. And it made its way to England, and next thing you know, I get a phone call, fly over to England and audition for JUDAS PRIEST."

He continued: "Rob [Halford] left [JUDAS PRIEST] in the early '90s, and I don't think they had a singer for about four years. And they finally looked for a singer. I was really the only singer that auditioned for the band. In February '96, I went in there and sang one line of a song and made the band."

Asked what it was like getting the phone call asking him to audition for JUDAS PRIEST, Owens said: "Well, I didn't believe it. It actually was these girls from New York who were friends of the drummer, who gave them a video tape of my very last show in the JUDAS PRIEST tribute band BRITISH STEEL. And I get a call from them saying, 'You have to call this number. It's JUDAS PRIEST. It's a lady named Jayne Andrews [who works for their] management.' So I ran and got the JUDAS PRIEST album and started looking for her name on the album to see… And it was there. I called them, and they said, 'You have a passport? We wanna meet you. We don't know if you've got to sing, but we wanna just see if you're not an L.A. rock star,' was their kind of words."

In a recent interview with CantonRep.com, Tim was asked if he thinks metal fans who didn't accept him fronting JUDAS PRIEST are able to view that period more fondly now that time has passed.

Regarding whether there is anything he would've done differently in his PRIEST days if he had the chance, Owens said: "I can't really regret anything I did, because it's allowed me to do everything I'm doing now. I probably would've never done the motorcycle thing, though. It wasn't my idea. The band said, 'Listen, it's not a Rob thing, it's a JUDAS PRIEST thing.' But it was a Rob thing. I knew he was gonna come back to the band someday, and I miss being around them and touring, because we had so much fun. But I look at my schedule, the months coming up I'm just slammed with stuff. My experience in PRIEST paved the way for all of this."