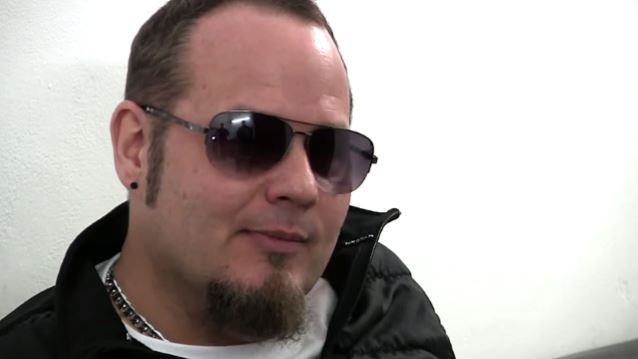 Über Rock: Given Rob Halford's indelible mark on [JUDAS PRIEST], was there ever a feeling that it was a thankless task [fronting the band in Rob's absence]?

Owens: I knew the reunion would come some day, but I've got to be honest, and I've said it before and I'll say it always, I wasn't upset. I really was ready to be out. Looking back now, if Halford's name had have been on "Jugulator" [JUDAS PRIEST's 1997 album which marked Owens's recorded debut with the band], it would probably have been [hailed as] a masterpiece. I just think that's how it is. And I understand, it's a normal situation. I mean, Rob's the man, but I just knew that I could do it vocally every night on stage. I wanted to do it, and I knew that as a JUDAS PRIEST fan myself, I knew that what I was doing was something that I would have liked, as somebody who could sing the songs to the same level.

Über Rock: How did you find out that you were out of the band?

Owens: I got an e-mail. It's funny, because I had just finished recording the ICED EARTH "Glorious Burden" record, and I was coming home, and I told my wife, "Man, I almost wish JUDAS PRIEST would fire me," because I'd never have quit. And I got home and I had got that e-mail. I had just recorded the ICED EARTH record because PRIEST was just in a down period and I wasn't getting paid at the time. No one knew what we were doing and we were like at "stall." Everybody was, like, "It must have really been bad." I was, like, "No." The record was done, so joining ICED EARTH was seamless. Every time I keep going on. What I do now, each time I get fired from bands, it's kind of like been a blessing. But, first of all, joining JUDAS PRIEST was the biggest blessing.

Über Rock: Have you any thoughts on [guitarist] K.K. Downing's exit from JUDAS PRIEST?

Owens: I hate it, but, I mean, I like [Downing's replacement] Richie [Faulkner]. I love Ken, and, you know, it's hard. It's like a family, right?! I hope that if they ever end that he comes back. I think he just hit, kind of, the end of the road.

Über Rock: What do you make of the three albums that they've made since Rob came back?

Owens: Yeah, they're good. I preferred "Jugulator", but, you know, Rob's going to prefer what he did, and I'm going to prefer what I did. Rob and I are good friends, as [I am] with the rest of the guys, we're still all good friends, and we can always joke about that. But the new one ["Redeemer Of Souls"] is getting back to their roots. You know what's great, though? JUDAS PRIEST are a band that can make an album like "Nostradamus". When they released "Turbo", people didn't like that. They've always experimented throughout their whole career. Whether you like it or not, that's what they've always done.