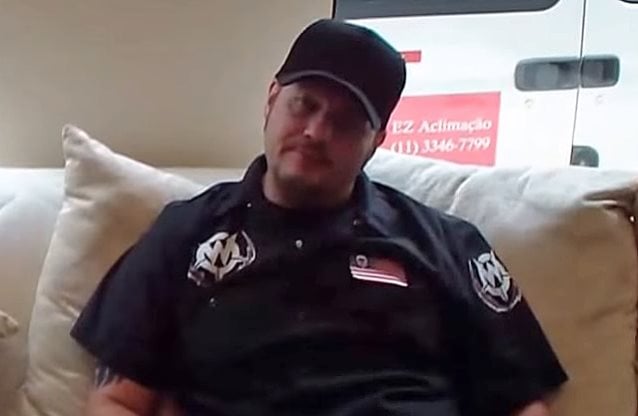 Brazil's StrikeCanal recently conducted an interview with former JUDAS PRIEST and ICED EARTH singer Tim "Ripper" Owens. You can now watch the chat below. A couple of excerpts follow (transcribed by BLABBERMOUTH.NET).

On whether the songs for JUDAS PRIEST's "Jugulator" album were already written prior to him joining the band:

Owens: "I joined in '96, and a lot of the songs were written throughout those years, not knowing if Rob [Halford, JUDAS PRIEST singer] was coming back or what was going on. So the songs were kind of written just about how they always wrote songs. Glenn [Tipton, JUDAS PRIEST guitarist] said, 'This is how we've always written them.' And it was a fantastic… It was a great run. I felt like family right from the start, and it was really nice, the relationship we had and still have. It was a great relationship. We got along great, and my time [with the band] was fantastic."

On being accused by some JUDAS PRIEST fans of changing the band's sound to a more brutal, modern direction on "Jugulator":

Owens: "Listen, if it's my fault that JUDAS PRIEST changed, then whose fault is it….? Every record JUDAS PRIEST puts out is different. I mean, 'Nostradamus' sounds nothing like JUDAS PRIEST ever wrote, ever. 'Turbo' sounded nothing like JUDAS PRIEST. You know, JUDAS PRIEST changes. They wrote 'Painkiller', and 'Jugulator' was a transition; it was kind of following what was going on. You've gotta remember, JUDAS PRIEST always went with the times a little bit. Glenn started playing arpeggios. PANTERA was really big [at the time]. [On the] 'Painkiller' [tour], they toured with PANTERA; PANTERA opened for JUDAS PRIEST. 'Painkiller' was a heavy record, and this was a natural progression. The difference is I probably had a few more different layers to my voice that they could tap into — some deeper, death metal kind of undertones to do backups and some different types of voices that they might be able to try. But it was JUDAS PRIEST. You've gotta remember: I'm a big fan of JUDAS PRIEST — still am and always was — so me listening to 'Jugulator' and 'Demolition', as a fan, I would be, 'This is great. This is great JUDAS PRIEST stuff.' And as JUDAS PRIEST continued without me, as a fan, I would really look back on the 'Jugulator' record and [go], 'Man, that was some great stuff.' It was JUDAS PRIEST, you know. I mean, not everybody liked 'Turbo'. Some fans did; some didn't. I love JUDAS PRIEST, because they change."

Owens: "We actually have an album done. Cleopatra is getting ready to release it. It's a lot different for me. It's a little more straightforward kind of rock. I think it's like hard rock with catchy choruses and just straightforward. Really good stuff. I absolutely love it. It's really good. We started off just going out and doing our music — JUDAS PRIEST and OZZY and whatever — in Russia. And Keri said, 'Man, this is great. Let's write music.' So it should be out within months. I would think either January, maybe February — somewhere in there. And then I'm also doing my third CHARRED WALLS OF THE DAMNED record with Richard Christy. I'll do the vocals for that in January. So I'll have two records coming out within a year — two new records."