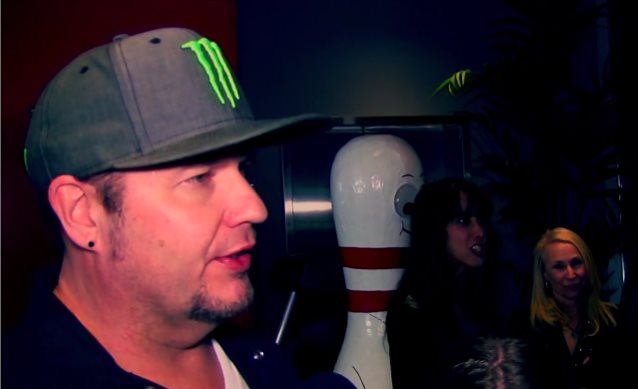 DIO DISCIPLES singer Tim "Ripper" Owens has responded to Vivian Campbell's recent claim that the band has "zero credibility" as a Ronnie James Dio tribute project despite the fact that the group is fully supported by Ronnie's widow/manager, Wendy.

Asked by Eric Blair of "The Blairing Out With Eric Blair Show" at last month's Bowl 4 Ronnie bowling party in Studio City, California why he thinks Vivian seems to have such an issue with DIO DISCIPLES, Owens said (see video below): "I've gotta be honest, I really don't give a shit what he does. I don't know how much money they [LAST IN LINE] donate to the cancer foundation — I imagine they do, because [Vivian] had cancer; I would hope he does — but the main reason we're [DIO DISCIPLES] doing it is... I mean, listen, [DIO DISCIPLES is] the least-paying thing that I do. We do it to raise money and do this and to keep Ronnie's fans happy and keep him out there. If that's why they're [LAST IN LINE] doing it, if they're all not really taking money from it and if they're all putting money into the cancer foundations and raising awareness, that's fantastic [and] it's good for 'em."

He added: "Listen, I don't care. I think the more people that celebrate Ronnie James Dio, the better. I don't know much about Vivian, and I knew nothing about Vivian before [his involvement with] Ronnie, so… You know what I mean? Listen, he's fantastic, and those [early DIO] records are amazing. But let's all just celebrate Ronnie."

DIO DISCIPLES guitarist Craig Goldy told Blair at the same event that he didn't understand why Vivian was still so bitter three decades after his exit from DIO. "I don't know what happened between those two [Ronnie and Vivian], but I can't imagine that it was that vile for [Vivian] to hang on to that," Craig said. "I mean, some people just hold a grudge. And I love Vivian Campbell's music. And I don't know… For all I know, Vivian Campbell might be a wonderful human being who just happens to be one of those guys who holds on to a grudge. That's all it seems like — he just seems determined to hold on to a grudge."

Campbell, who was diagnosed with Hodgkin's lymphoma in 2013, recently dismissed persistent Internet speculation that his decision to launch LAST IN LINE was somehow financially motivated. He explained: "It's so difficult to get the economics of it to work. I'm not even talking about making money — I'm talking about not losing money.

"We are not doing this for money, believe me! There's fuck-all money in this. [Laughs] I get plenty of money in my day job with DEF LEPPARD. This is a passion project, this is very much a labor of love, and I'm very excited to do it."