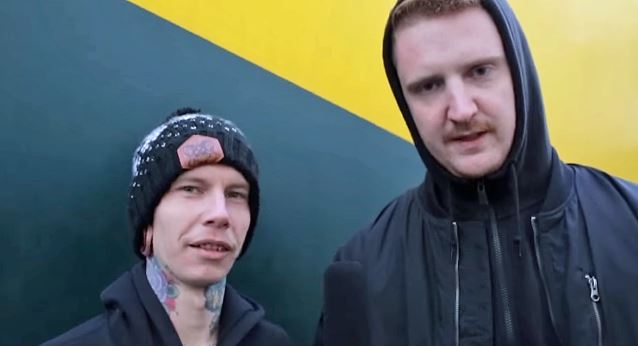 Pitcam.tv conducted an interview with bassist Sean Delander and drummer Lee Stanton of Australian death metallers THY ART IS MURDER on January 24 in Berlin Germany. You can now watch the chat below.

Asked if they were prepared for the departure of THY ART IS MURDER's longtime singer CJ McMahon prior to the start of the band's European tour with PARKWAY DRIVE and ARCHITECTS, Delander said: "Not really. It's a shame, 'cause it's a really big tour for us. But we've got Nick Arthur [from MOLOTOV SOLUTION] filling in. He's doing a great job. I mean, we weren't gonna not do the tour 'cause we didn't have CJ. It's definitely different, but we're just keeping on trucking."

Regarding THY ART IS MUDER's search for McMahon's replacement, Delander said: "We're just making a shortlist. We've got a couple of friends that we've approached, or they've approached us. So we're just sending out some instrumental tracks for them to record themselves on. We're gonna take it slow. I don't think there's any rush. It'd be nice to get someone permanent before the summertime and all that. But we don't really wanna rush into it."

"Holy War" was released in Australia via UNFD and in other parts of the world through Nuclear Blast. Produced and mixed by Will Putney (SUICIDE SILENCE, EXHUMED, THE ACACIA STRAIN), the CD was made available in various formats: digital; limited digipak + bonus track; assorted color vinyl; exclusive mail-order picture disc.