Just in time for Halloween, a scarily impressive alliance of metal and hard rock luminaries has formed to create one of the most depraved abominations of musical crossbreeding in history — an all-metal tribute to the King Of Pop, Michael Jackson, available on CD October 22! Never before have such quintessential pop hits as "Beat It", "Thriller", "Billy Jean" and "Man In The Mirror" been so completely transformed, substituting softly stylized synths with crunchy, distorted guitars, replacing the pitter patter of programmed beats with pulverizing double bass acoustic drums, and topping it off with some of the finest, most powerful vocals in metal. When completed, these reinventions pay due respect to the expertly crafted melodies and songs that made Michael Jackson one of the most beloved figures in all of music, and offer legions of metalheads a reason to simultaneously grab their crotches and throw the horns in celebration!

Spearheaded by producer/musician Bob Kulick, who also helped in the arrangement of these cover versions, the project was in his words a "labor of love" for all involved. Exclaims Kulick: "We made these awesome songs kick ass while still being faithful to the original versions. Add killer players like Doug Aldrich, Billy Sheehan, Bruce Kulick, Rudy Sarzo, Tony Franklin, Craig Goldy, Bumblefoot, Phil Campbell and you've got some real MAGIC!" Rudy Sarzo, a stalwart of the metal scene as a member of both QUIET RIOT and QUEENSRŸCHE, reflects: "Michael Jackson's music is synonymous with iconic rockers such as Eddie Van Halen, Steve Stevens and Slash. So it's only fitting that the rock community pays tribute to this legendary artist with Metal Mike!" And FISHBONE's Angelo Moore expresses great enthusiasm for his contribution, saying: "I never thought I would hear myself doing a cover of 'The Way You Make Me Feel', but it's an honor and a dream come true. We put a different twist on it to give it a whole new light, or maybe I should say a whole new dark!"

In addition to the legends Kulick enlisted, several of today's modern metal figures also contributed, including Elias Soriano of NONPOINT, who comments, "It was my pleasure to do this tribute to MJ. My admiration for the talent and history he has given to music overall will be hard to replace. My only wish is that I did him justice with my performance." Jason Myers of ICARUS WITCH, one of the current flag bearers in the traditional metal scene, declares: "When we were approached by Cleopatra to contribute to the Michael Jackson tribute we were honored (due to the legendary talent already on board), but a bit skeptical about how our fans would react...Choosing an unorthodox hit took a bit of pressure off and allowed us to put more of ourselves into the track."

Finally, bassist Tony Franklin, who has worked with everyone from LED ZEPPELIN's Jimmy Page to PINK FLOYD's David Gilmour to WHITESNAKE, confirms the surprise and astonishment many felt during the creation of the album, "The first thing I noticed was how easily these out and out pop songs translated to the metal genre. That is the sign of, one, a great song and, two, a great production and arrangement." He goes on to note that it wasn't just the songs that were transformed when Metal met Pop on these recordings; the performers themselves were transformed. He states, "It was very cool to see how the guest artists interpreted these songs as it brought out a different side of them - a side we wouldn't usually hear."

"Thriller – A Metal Tribute To Michael Jackson" features appearances by the following musicians: 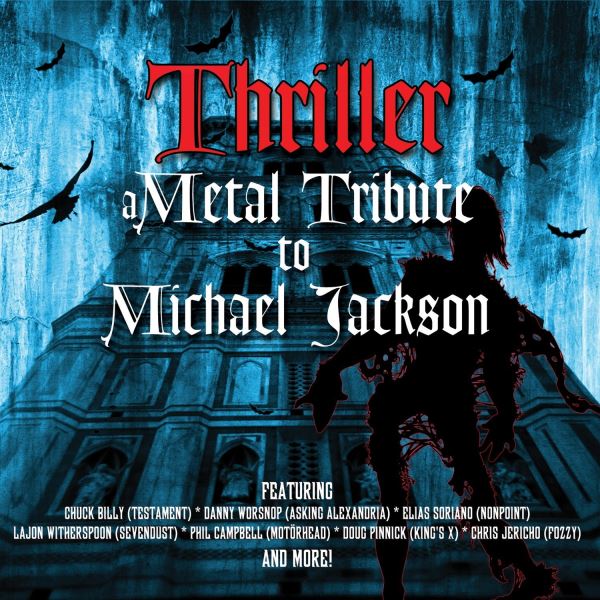