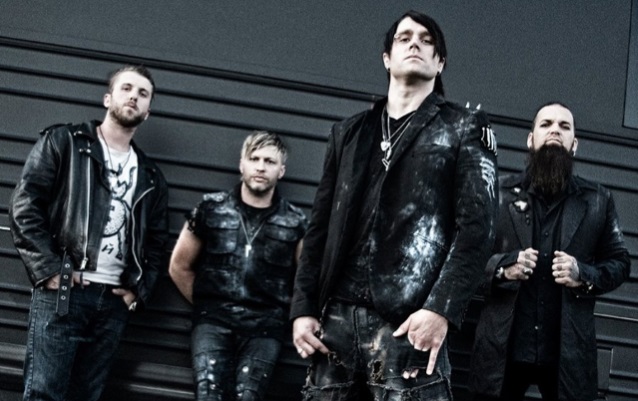 According to The Pulse Of Radio, THREE DAYS GRACE bassist Brad Walst told Billboard.com on Friday (July 18) that the band's fifth studio album is well on its way to completion, saying, "We've been writing non-stop and recording a lot. We have a good 10 songs, probably, recorded. We're almost done with this record. We have another couple months to do in this studio and we're done with this thing. It'll hopefully be out by early next year."

As for what the record sounds like, Walst told The Pulse Of Radio that it goes back to the Canadian act's roots. "It's a pretty aggressive record," he said. "You know, the last record, 'Transit Of Venus', we kind of brought the synth world in a little bit and, you know, experimented a little bit with songwriting and our whole process. But you know, I've got to tell you, this record is really quite heavy and, you know, sonically and lyrically. It's just got a heavy sound and there's some really great songs on it. Man, I'm excited for people to hear it because I think they're gonna really like it."

"I think any feeling of the band being off track didn't last too long," Brad told Billboard.com. "As soon as Matt kind of stepped in and took the reins as the singer, it clicked. He's getting better and better and people just love him, and the live shows are proof.

"We've done probably over 120 shows now with Matt, and we've just had a lot of fun, man. And organically we started writing with Matt last year, and it's really cool. It's been a great progression. It's exciting for us."