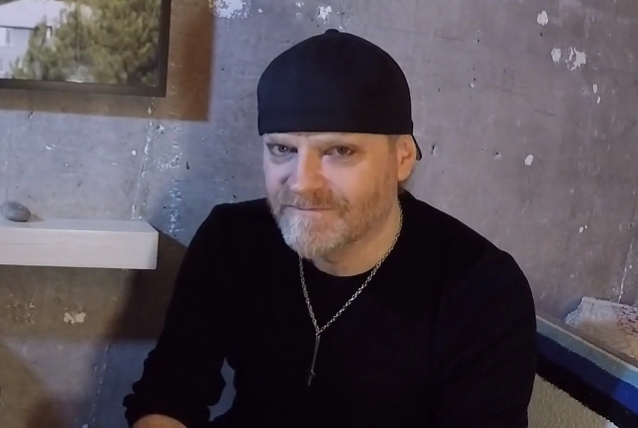 The Jimmy Cabbs 5150 Interview Series conducted an interview with former CELTIC FROST and current TRIPTYKON frontman Thomas Gabriel Fischer prior to TRIPTYKON's appearance at the 2018 Decibel Metal And Beer Festival, which was held December 1-2 in at The Wiltern in Los Angeles, California. You can watch the entire chat in three parts below. A few excerpts follow (transcribed by BLABBERMOUTH.NET).

On how he developed as an artist in the 1980s while organized religion and conservative politics were in control:

Thomas: "Isn't organized religion always out of control? Hasn't it been for the last 5,000 years? You said I have an impeccable record — I'd like to disagree. I wish I had, but I don't. I'm a human being like everybody else. I've made huge mistakes in my career that I have to live with, just to set the record straight. It's very kind of you, but it doesn't reflect reality. As far how I was able to accomplish all of this, if there's anything I accomplished, the fact of the matter — and that's not P.R speak; it's really how I feel — people gave me a chance. I owe everything to the people who gave my music a chance and listened to it. 'Cause we started our path being ridiculed. When we formed HELLHAMMER, it was a band that was an outcast, a band formed by outcasts and a band that was an outcast. People ridiculed us, we got really bad reviews and everything and it was a very long path. We owe it all, everything that happened afterward, we owe it to people who actually gave our music a chance, who were open and listened to us and gave us a few minutes of their lives and then decided it was good. Without these people, I wouldn't be here. I wouldn't have had a so-called 'career.' That's how I accomplished it by the grace of our audience and that's simply the fact. I'm a human being; I owe it all to the people who listen to us… That's the way it is. I know the scene is filled with self-styled celebrities, but when it comes down to it, we wouldn't be here…I used to be in the front row before I was a musician myself. I was a die-hard fan of many bands, bought their records, their t-shirts and everything. Then I became a musician and I could only do this because of other fans like this. It's simply a fact. It doesn't hurt to notice."

On whether everything he composes comes from a place of "sincerity":

Thomas: "For better or for worse, yes, of course. Of course, you're exposing yourself when you're honest and when you let your music reflect the deepness of your personality — whether it's shallow or deep, whatever, if you let music reflect that, you're exposing yourself. It's not a kind world. Once you're exposing yourself, you become very vulnerable and there again, you're dependent on the grace of those who listen to it and what they make out of it. but, yeah, of course, I try to be honest. What else can I do? It's the only thing I have. I didn't study music, I didn't have a fantastic youth. I didn't have rich parents, I come from a very poor background. All I had was me and my emotions. I had no connection, no money, no nothing. I had to depend on what I was and what I had."

On the "rebellious" nature of his early HELLHAMMER and CELTIC FROST compositions:

Thomas: "The rebelliousness didn't exist by design. It was all we had. For one reason or another, usually our upbringing and the nature of the home we came from, we weren't accepted in the mainstream. We didn't really have a choice than to be rebellious. It wasn't like we sat down and [decided] to be hipster rebellious. The only path left for us when nobody accepts you is to be rebellious or to commit suicide. So, HELLHAMMER and early CELTIC FROST was simply a gathering of people who were, in one way or another, outcasts. Most of us had a very challenging youth. And because the existing world didn't accept us, we created our own world. And the happy side effect was that the music we played kept everybody away that we hated. In the small picture, parents, teachers; in the big picture, politicians, whatever. Nobody wanted to have anything to do with these people playing this music and looking the way that we did. It was a give-and-take. We had to be rebellious and it fueled itself. And it's not the worst thing; at least we did something constructive with that situation. Some of my friends resorted to drugs and alcohol, and it ended really badly. We put our frustration and our being outcasts, we put it into music. And at least something positive came out of it and some other people enjoyed it too. So I think we were very lucky. There again, not really by design. It all happened the way it happened, but we were very lucky. It could have been different. But I'm proud we did this. I'm proud we didn't give in. I'm proud we didn't bend to the pressures of society and everything. We were outcasts and we stuck with it."

On whether he's been able to adapt HELLHAMMER's early catalog to where he is as an artist today:

Thomas: "Of course. Otherwise I wouldn't do it. As I said, I got immensely lucrative offers throughout the '90s and 2000s for a reformation of HELLHAMMER. I never did it, because it has to feel right. And, of course, I do it because I feel enthusiastic about it musically. There was also a long time when certain members of HELLHAMMER, myself included, felt uncomfortable with it, because of how closely HELLHAMMER was connected to certain very difficult aspects of our lives, our youth. And for a while, we were very happy to leave these periods behind ourselves. Later in my life, I was able to look at HELLHAMMER more… to separate these things and look at HELLHAMMER more musically without all the baggage attached to it. And that was a very healthy thing. And I feel much more comfortable with all of this. And, of course, as I said earlier, these songs are very important for my life, my own path in life. And during rehearsals of the TRIUMPH OF DEATH project, it was fantastic to hear this. There's a certain youthful innocence in these songs; they're very punky. Some of these songs are more punk than metal. They reflect the do-it-yourself attitude of the time, the desperation of the time, the extremity, the fanaticism. And these are all positive things to me now, because they were the roots of the music that we are still playing. And it feels fantastic to be so closely connected to this again. It kind of closes a circle to me."

On TRIPTYKON's plans for a new studio album:

Thomas: "I know we're very overdue with a new album. We would actually have a finished album now, but then Roadburn festival in Europe contacted us and asked me if I would be interested in finishing CELTIC FROST 'Requiem', which was a plan I had for many, many years. And Roadburn offered me an orchestra and everything. So I dedicated most of this year to writing the missing part of the 'Requiem' and everything else in TRIPTYKON had to be put into the background. TRIPTYKON has been working on the 'Requiem' all year. It's a hugely complex undertaking, so that's what we did this year. So the new album will be finished next year. Unfortunately, yet another year without an album. I regret that myself too — we're totally overdue."

Fischer recently announced the TRIUMPH OF DEATH project, which commence playing HELLHAMMER's music onstage in 2019. TRIUMPH OF DEATH will not record any new music but is solely dedicated to performing both well-know and obscure HELLHAMMER songs.