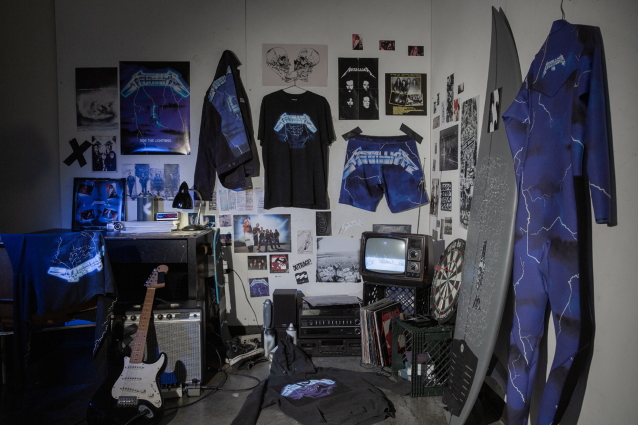 This premium design collaboration with METALLICA comes through Billabong LAB, a platform that supports artists, musicians, designers and photographers. The five-part collection, released between October 2019 and March 2020, features a unique blend of boardsports-engineered apparel from Billabong and iconic album artwork from Rock And Roll Hall Of Fame inductees METALLICA.

Several pieces in the collection have already sold out due to high demand, including the AI Forever x Metallica short sleeve T-shirt in memory of surf champion Andy Irons, released as part of the December 2019 drop.

Available today, the third product drop takes inspiration from METALLICA's second studio album, "Ride The Lightning". Recorded in 1984 on a shoestring budget, the critically acclaimed album helped define METALLICA's unique sound while establishing a louder and faster musical genre via milestone tracks such as the incendiary "Fight Fire With Fire", the venerated commentary on the chaos of war, "For Whom The Bell Tolls", and one of the most anthemic songs of the band's storied career, "Creeping Death". "Ride The Lightning" has gone on to become certified six-times platinum in the United States and has sold over ten million copies globally.

With METALLICA's Kirk Hammett and Robert Trujillo being avid surfers, the album's rebellious spirit finds its natural counterpart in Billabong's engineered garments that are built to endure the harshest ocean conditions.

"The artwork on this third drop aligned with the raw energy of Italo's surfing couldn't be more fitting," said Evan Slater, VP of global marketing at Billabong. "Ferreira truly 'Rides The Lightning' whenever he stands up on a surfboard."

As for the "Ride The Lightning" collection itself, the short-sleeved t-shirt made from ring-spun cotton displays the METALLICA logo in the electrified style of the band's genre-defining album. Rendered in stark white lightning bolts on dark background, Billabong's crested wave logo makes the collab official. Identical lightning artwork also features on the long-sleeved shirt — including extra art details on the sleeves — and on the hooded fleece top crafted from 70 percent cotton and 30 percent polyester.

Taking the collection into street style, the cotton corduroy jacket features "Ride The Lightning" album cover art — an electric chair in the midst of lightning bolts — as a back print. The premium jacket is finished in potassium stone wash with applique and embroidery details including a Billabong patch on the sleeve.

For those looking to jump in the water, a new surf trunk crafted from 90 percent recycled polyester and 10 percent elastane blends proven performance with "Ride The Lightning" artwork in a 19-inch athletic fit. And as the ultimate upgrade for metal-minded surfers, the third drop contains Billabong's high-end Revolution neoprene wetsuit with a full-body "Ride The Lightning" graphene sublimation print.

See all special products from the first three drops of the collection on the Billabong LAB x Metallica collection landing page.

"There's a lot of rage in metal, but it's a good rage," said Trujillo about the collaboration with Billabong LAB. "It's a great release, almost like surfing, out in the rhythm of the ocean."

A video featuring members of METALLICA and the Billabong surfing team sharing their take on the new collection can be viewed below.

The next two product deliveries in the Billabong x Metallica 2019-2020 collection will hit e-commerce and international retail between February and March 2020.