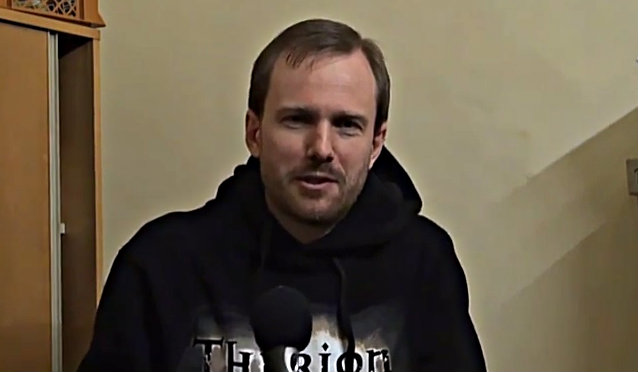 Stormbringer webzine conducted an interview with Christofer Johnsson of Swedish progressive/experimental metallers THERION prior to the band's December 12 concert in Vienna, Austria. You can now watch the chat below.

Johnsson revealed in a recent online posting that the next THERION album will be a "rock opera… about the rise and fall of Antichrist… inspired by and partly (not to be confused with 'entirely') based on Vladimir Soloviev's 'A Short Story Of The Anti-Christ'."

He added: "I have been attempting to write a regular opera for some years following the same theme (which is now being therionized to fit in with what we are writing for this rock opera). We don't have a name for it yet, but for the time being we could humorously give it the working title 'Antichrist Superstar'."

THERION last year celebrated its 25th anniversary with the release of a new album, "Les Fleurs Du Mal". The band signed a licensing deal with End Of The Light Records to make the CD available in the U.S., Canada and Mexico.

The "Les Fleurs Du Mal" title refers to Charles Baudelaire's (French author and poet 1821 - 1867) famous poem collection "Flowers Of Evil" ("Les Fleurs Du Mal" in French) that caused such an upset of emotions in France that the author was brought to court and got fined for "insulting the public" with six of the poems, that remained forbidden in France until 1949 when the ban was finally lifted. The spirit of the project is a tribute to Baudelaire, and is imbued into both music and artwork.