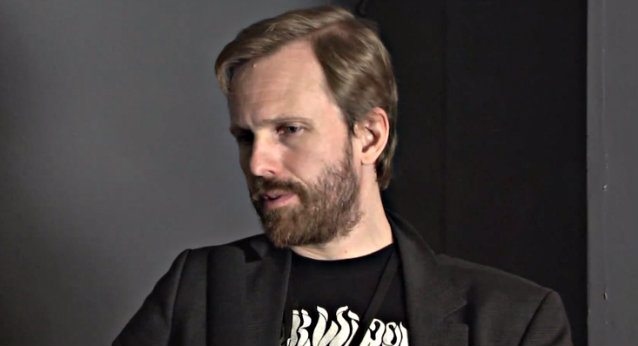 "The coming rock opera will be about the rise and fall of Antichrist and is inspired by and partly (not to be confused with 'entirely') based on Vladimir Soloviev's 'A Short Story Of The Anti-Christ'.

"I have been attempting to write a regular opera for some years following the same theme (which is now being therionized to fit in with what we are writing for this rock opera). We don't have a name for it yet, but for the time being we could humorously give it the working title 'Antichrist Superstar'.

"We will be performing beta versions of the overture and four excerpts from the opera. An excerpt is a part of something (not to be confused with the concept of a song;) you might consider it torn-out pieces from a puzzle. Here is a list of what we will be performing:

1. 'Overture' - It contains the main theme of the opera and simply has to be played. It's the beta version 0.8 and still has some potential to expand further, but the parts that are already there will likely sound something in the vein of this version.

2. 'End Of The Dynasty' / 'Military March Of The United States Of Europe' - In the book, there is an Asian rule over Europe for 50 years after China and Japan have successfully invaded and occupied the continent. In the end, Europe manages to fight back and drives the occupants back east. 'End Of The Dynasty' is the swan song of the last Asian emperor of this dynasty. The orchestration needs to be worked on a bit more, but the basic idea is there. Musically, it's band and orchestra playing all the time in a very therionish type of manner. The military march is played while the European army marches back. It has not been orchestrated yet, so we will just be performing it in a guitar-based form. But I actually have become quite fond of it this way, so maybe we'll partly keep it like that and just add on some piccolo flute and maybe some brass typical for military orchestras.

3. 'Who's Your God?' - Here Antichrist is being interrogated by some prominent religious people. He is at the time a world leader and by far the most beloved leader of all times. Musically, this is an example of a part where the guitars have a smaller role and the focus is very vocally oriented and mostly backed up by orchestra, bass and drums. There's still work to be done on it; there is a need for chorus to perform it live like the composer intended. But you will get a good sense of it.

4. 'Onda Toner' (Swedish for 'evil tones') - This is a part that comes fairly soon after 'Who's Your God?', in which there is an outspoken accusation that he is the Antichrist. Making an opera/rock opera on the theme like this without including the famous 'Diabolus In Musica' interval would of course be an epic fail. So in the heat of this very intense moment, you will be enjoying infernal tritones and diminished chords backed up by unusual drumbeats to 3/4 time signatures — for those of you not acquainted with musical terms; it sounds very infernal and weird (in a good way). This part feels quite finished in terms of orchestration and vocal melodies/harmonies. It will require many more singers, when performed as composed later on, however.

5. 'Sad End' - This is a very emotional duet at the end of the opera. I don't want to spoil what happens (the end of our opera will be totally different from the Soloviev book, as it has been completely rewritten), but it involves two important people in the opera having lost everything they fought for and, at the time of dying, they start reflecting on their lives and things they did wrong. The vocal duet is pretty much finished. There will be more stuff added before the duet, but this particular piece will sound at least close to this. Orchestration is quite basic at the moment. We will see if we keep it that way (it is sometimes better) or if we want work more on it.

"The purpose of this tour is to try out some of the parts of the rock opera to see if we're on the right way or not. So we are looking forward to all constructive comments afterwards.

"Before commenting, keep this in mind: Imagine that a movie is about to be filmed and needs film music. They need a death metal song for one scene, a love ballad for another scene and a heavy metal track for the third scene. You're being asked your opinion if they are good songs. Then it's totally useless bombing the movie producer with with opinions like, 'I don't like ballads/death metal' or 'I prefer the heavy metal song because that's my kind of music.' He wants to know if each song is good or not, not what taste you have in terms of music styles. If the movie needs to have a love ballad at a certain place, then it will be a ballad there. And he wants to know if it's a good ballad or not.

"Same thing applies to opinions on what we perform from the opera on this tour. It's totally useless information to us what styles you prefer. The opera needs to have different styles in music when different things happen on stage. You cannot have happy music when there is a sad scene and an army cannot march to just any kind of music. So each type of music needs to be judged for what it is and what it is supposed to be.

"I know this may be a slightly complicated request for many people on Internet who are used to comment off-the-cuff on things they come across on the web, without any deeper reflection or paying any attention to circumstances and facts. But none of those are likely to read this text anyway, so I'm fairly confident at least a majority will be able to supply us with intelligent usable feedback. It's a great bonus if people also make an effort to use their imagination a bit extra and picture how these pieces will sound later with more singers and a real orchestra (obviously we use samples and keyboards to demonstrate this now.) You may consider what you will hear an advanced sketch of something that later will be an oil painting.

"For those of you coming to see us on this tour: there will be an attractive special offer concerning a future release for the fans coming to the concerts. Hint: It could be a good idea to bring 20 euro extra to the show."

THERION last year celebrated its 25th anniversary with the release of a new album, "Les Fleurs Du Mal". The band signed a licensing deal with End Of The Light Records to make the CD available in the U.S., Canada and Mexico.

The "Les Fleurs Du Mal" title refers to Charles Baudelaire's (French author and poet 1821 - 1867) famous poem collection "Flowers Of Evil" ("Les Fleurs Du Mal" in French) that caused such an upset of emotions in France that the author was brought to court and got fined for "insulting the public" with six of the poems, that remained forbidden in France until 1949 when the ban was finally lifted. The spirit of the project is a tribute to Baudelaire, and is imbued into both music and artwork.