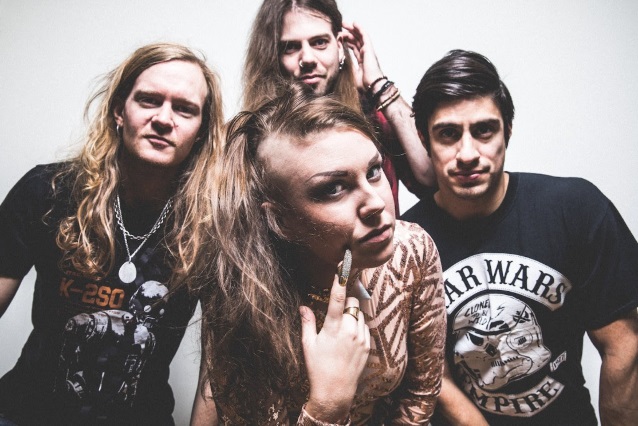 The Big Bang, space travel, black holes, singularity, aliens, stars colliding and the inevitable end of the universe: the solo debut from Vikström spans time from modern day science to the eternal, philosophical questions regarding the beginning, the end and life beyond our own planet.

As the singer for the Swedish symphonic metal phenomenon THERION, Linnea Vikström already has a worldwide fanbase. But when she makes her solo debut as QFT (QUANTUM FIELD THEORY), we get to meet a completely new side of the beloved vocalist.

"The first version of 'Big Bang' was very different from the version that made it to the record," she says. "There was a completely different verse which we decided to remove and instead we went with a new melody on the track. The first demo production was of a completely different character and after that first one, at least five other ones followed until we found a form and a production that felt right! 'Big Bang' is not only a song about the start of the universe, but also acts as a homage to the scientific method."

The upcoming album, "Live In Space", is a dynamic and musically diversified theme album about the universe, where the ten tracks are beautifully bound together by Linnéa's enormous vocal range and clear vision. The result is a detailed journey through space and time, that won't leave anyone unaffected. "Live In Space" is an album where both the music and the lyrics offers you much to discover.

Under the supervision of legendary Swedish sound engineer Lennart Östlund (ABBA, LED ZEPPELIN), "Live In Space" was basically recorded completely live. Together with the musicians Georg Härnsten Egg (drums), Jonathan Olsson (bass) and Mano Lewys (guitar), Linnéa Vikström only needed a few recordings per track. That the album — apart from some additional choirs — was recorded live can't be heard when you listen to the result. On the contrary, "Live In Space" sounds like the product of immense and costly studio sessions.