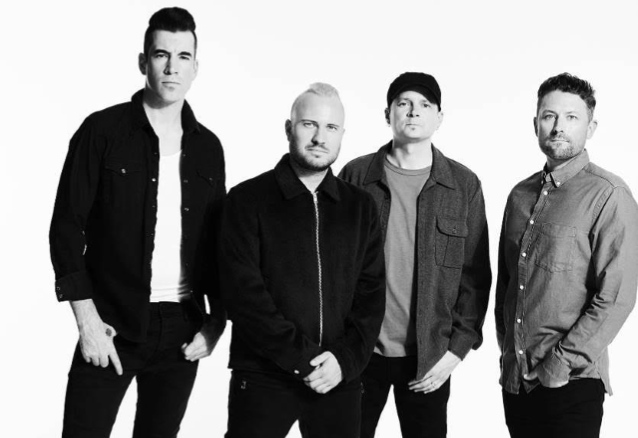 THEORY OF A DEADMAN (a.k.a. THEORY) has announced "Live From MTELUS", a 30-minute concert stream set to air tonight at 8:00 p.m. ET / 5:00 p.m. PT on the band's official YouTube channel. Captured during THEORY's recent headline tour at Montreal's MTELUS performing arts center, the historic performance sees THEORY delivering a career-spanning set in front of a packed crowd. Furthermore, the band will join the YouTube livestream 30 minutes early at 7:30 p.m. ET / 4:30 p.m. PT to chat with fans and answers questions in the comments section.

In addition to the concert stream, this Friday, July 3, THEORY will release a live version of its single "World Keeps Spinning" across all streaming platforms. Recorded during their MTELUS performance, the live version arrives as "World Keeps Spinning" approaches Top 15 at Active Rock radio. The powerful single — a personal track written by frontman Tyler Connolly about depression and anxiety — follows THEORY's No. 1 hit "History Of Violence", which became its sixth No. 1 on the Mediabase Active Rock chart and fourth No. 1 on the Billboard Mainstream Rock chart. Turning the tables on a story of domestic violence, "History Of Violence" is joined by a gripping official music video illustrating a searing snapshot of a woman enduring an abusive husband as she plans to fight back, eventually ending up in jail but free of her abuser.

THEORY OF A DEADMAN's seventh studio album, "Say Nothing", was released in January via Atlantic Records. The disc was recorded in London with producer Martin Terefe (Jason Mraz, Yungblud) and it features timely lyrical commentary on many issues that our society is grappling with today.

"I look at the record as a microcosm of our current era," says guitarist Dave Brenner. "It's a reminder to look inward at what's happening and what we're becoming. I hope everyone dives into the words. At the same time, music is still an escape. Maybe we can give the world a little solace and encourage everyone to treat each other better."