During a December 2018 appearance on "Trunk Nation LA Invasion: Live From The Rainbow Bar & Grill" on SiriusXM, Mike spoke about THE WINERY DOGS' decision to play together again. He said: "Everybody assumed we broke up. We all just went off to do our… All three of us do all these other things, so we just decided to take a break and do some other things, but we always knew there'd be a time we'd come together. It was never gonna be a one-time thing."

Asked how the April-May 2019 tour came about, Mike said: "Richie came out to see SONS OF APOLLO when we played L.A. in the spring, or whenever it was, and I remember talking with him, saying, 'Hey, it'd be fun to just play live. We don't have to commit to doing a new album. We don't have to make out this big schedule, this big plan.'… It was great for the three of us to see each other, and it was, like, 'Hey, it would be fun to play some gigs next year — whenever we can. Not have to commit to an album, not have to commit to a year schedule or whatever.' So that was it. It was as simple as that."

Richie concurred, saying: "What we wanted to do is get together and not forget about what we have. There's a lot of people that love the band, but we love the band too, so we wanted to just find a window where we could actually play together. And what Mike was saying, the idea of committing to this and committing to that, with my recent experience, making plans is a waste of time, 'cause you just don't know what's gonna happen. But we wanted to at least get together and play. And so, in my estimation, I would imagine that we would play together and I would say, 'I really miss you, Mike,' and then Billy, 'I really miss you, Billy.' And, 'Hey, by the way, Richie, I have this really cool bass riff I was working on.' And then, suddenly, 'That sounds like a song.' And then let it evolve."

According to Kotzen, there has been no concrete discussion about THE WINERY DOGS making another studio album. "You know me how I am — I don't make a lot of plans," he said. "And Mike knows — I'm like water, and if the water flows in the right direction, we're gonna make another record at some point. But initially, now, we just wanna have that feeling of playing together, capturing that magic we had in my garage when we wrote the first record."

Added Mike: "It's like when you have a new band starting out. And before you even have your first record deal, you're doing it for the fun of it; you're doing it because you you like playing together. You wanna write together, you wanna play shows together, and then as soon as you sign that record deal, then suddenly you have commitments. 'Oh, we've gotta commit to this timeline. Let's block out this year.' And blah blah blah. Writing a record takes months, recording a record takes months, and it takes months to put it out. Then you've gotta commit to a tour. We wanna just have fun. We just wanna play for the fun of it, not commit to another album yet, and just enjoy the window of opportunity to jam and have fun, and leave it as simple as that."

Since wrapping up an extensive world tour in support of their sophomore album, "Hot Streak", in the summer of 2016, THE WINERY DOGS had performed live on just two occasions — during the inaugural "Monsterwood" West Coast edition of the Monsters Of Rock cruise in the fall of 2016, and nearly a year later during an "Ultimate Jam Night" tribute to late ADRENALINE MOB, SOTO and TRANS-SIBERIAN ORCHESTRA bassist David Zablidowsky at the Whisky A Go Go in West Hollywood, California.

Over the past two and a half years, each of the members of THE WINERY DOGS has toured extensively with other acts — Kotzen with his long-running solo band; Sheehan with SONS OF APOLLO and MR. BIG; and Portnoy with SONS OF APOLLO, THE NEAL MORSE BAND and SHATTERED FORTRESS. 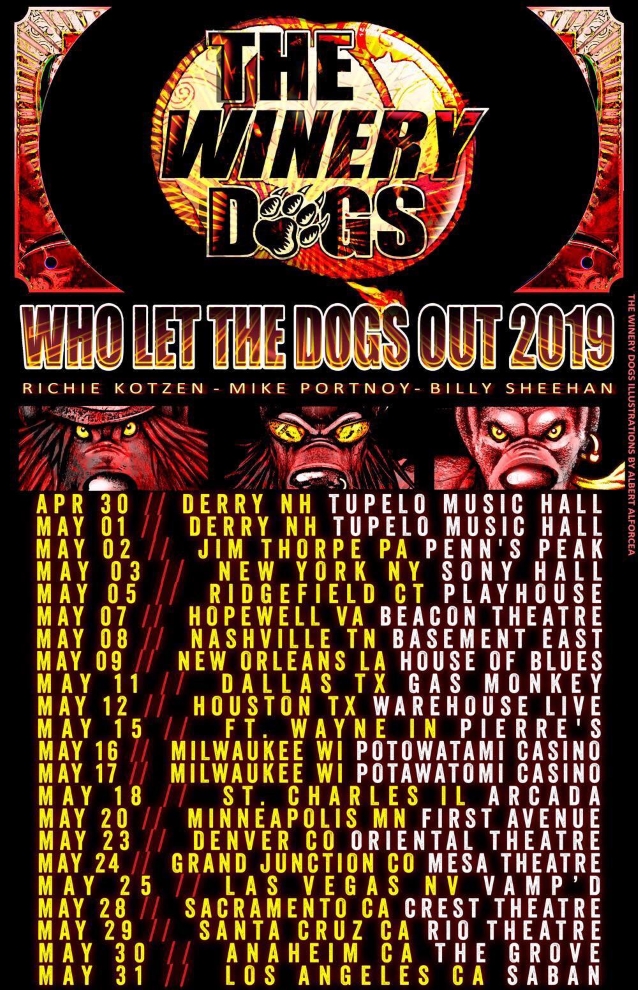