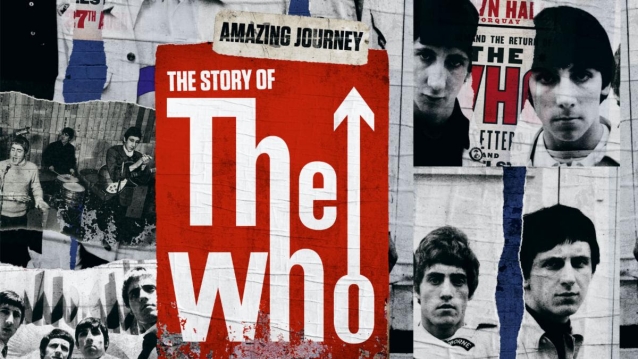 "Amazing Journey: The Story Of The Who", the acclaimed Grammy-nominated career-spanning documentary chronicling the history of THE WHO, is now available to stream for the first time exclusively on The Coda Collection.

Directed by Murray Lerner and Paul Crowder, and featuring interviews with the group's co-founders and surviving members Pete Townshend and Roger Daltrey, "Amazing Journey" is the definitive story of the British rock legends. Including rare and previously unseen footage, a treasure trove of performance clips and investigative forays into the group's music and history, the film captures the band's origins and influence over the course of their 50-plus-year career.

"Amazing Journey" also documents pivotal moments in the band's trajectory, including the emergence of 1960s mod culture, the group's reputation for destroying their instruments on-stage, how their hit "I Can't Explain" got them a record deal on the spot, embracing new formats with their rock opera opus "Tommy", the sudden deaths of Keith Moon and John Entwistle, the delicate creative relationship between Daltrey and Townshend, the group's historic appearance at The Concert For New York benefit in 2001, and much more. In addition to in-depth interviews with Townshend and Daltrey, the film features commentary from industry figures associated with the band's career, as well as musical peers Eddie Vedder, Noel Gallagher, Sting, The Edge, Steve Jones and more.

"It's not easy to capture in film the power and energy of any rock band, especially the four characters that made up THE WHO, the brilliance of Pete Townshend's music, and the magic that happened between Pete, John, Keith and myself. But WHO fans tell me 'Amazing Journey' does just that," THE WHO's Roger Daltrey said. "From the moment that Keith joined us in The Railway Hotel back in 1964, it was like a bottle of champagne being uncorked. We just clicked. And here we are, all these years later — we've lost our dear bandmates Keith and John, and Pete and I continue to play together and carry this story forward. Thanks to Coda for putting this show up, and enjoy this film about our journey. I'm still living it!"

The Coda Collection has also debuted "Six Quick Ones", a complementary piece featuring six mini-documentaries which offer an extended profile of each band member and further explore the group's unique musical chemistry.

Launched at the beginning of 2021, The Coda Collection is a subscription streaming offering featuring an exclusive, curated selection of the most iconic music documentaries, concert films, and episodic series spanning decades and genres via Amazon Prime video channels paired with a complementary website exploring new perspectives on music. The Coda Collection offers hundreds of hours of exclusive concert and documentary content from artists ranging from such legendary icons as Jimi Hendrix, THE ROLLING STONES and John Lennon and Yoko Ono to contemporary premieres of new material by such diverse artists as EVANESCENCE, JANE'S ADDICTION, THE CURE and the critically acclaimed Dave Grohl-directed documentary "What Drives Us".

The Coda Collection is available to Amazon Prime members in the U.S. now for $4.99 per month, with a free seven-day trial, and will roll out globally throughout the rest of the year.

To explore The Coda Collection and to sign up for a free seven-day trial, visit www.codacollection.co.