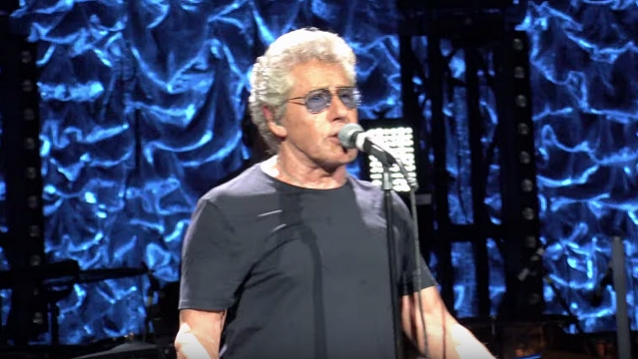 THE WHO was forced to cut its concert in Houston, Texas short after Roger Daltrey lost his voice. The legendary rock band managed to get through only eight songs at Toyota Center Wednesday night (September 25) before the singer told the crowd, "I think I should quit while I'm ahead," and walked offstage. Daltrey reportedly was suffering from ragweed allergies, with guitarist Pete Townshend telling the audience:"I'm really, really sorry. Roger cannot actually speak now. Apparently, before the show he saw a doctor, and, you know, he's been singing so fucking great through this tour. I don't know what the fuck's going on. He has been on top of his game."

Townshend added that he and his bandmates wanted to press on, but "this is Roger's show, really — it's a vocal show — and he's not in good shape," and there was no point in playing without him.

Townshend promised to return when THE WHO was able to reschedule the concert, although he admitted that he didn't know when this could happen since Daltrey's vocal surgeon requires him to take a day off after each date.

It is not presently clear if THE WHO will make its next scheduled concert, which is slated to happen tomorrow night (Friday, September 27) at the American Airlines Center in Dallas.

THE WHO will release its first new album in 13 years, titled "Who", on November 22. A new single, "Ball And Chain", is now available on all streaming services.