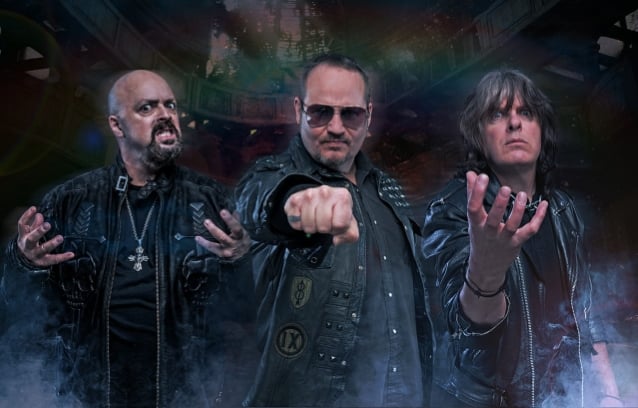 It's not every day that metalheads get the opportunity to witness three of metal's finest vocalists on the same concert stage — Tim "Ripper" Owens (JUDAS PRIEST, ICED EARTH, DIO DISCIPLES), Harry "The Tyrant" Conklin (JAG PANZER, SATAN'S HOST, TITAN FORCE), and Sean "The Hell Destroyer" Peck (CAGE, DENNER/SHERMANN, DEATH DEALER). But soon, U.S. fans will get their chance, when THE THREE TREMORS launch their first-ever U.S. tour in support of their self-titled debut — kicking off on February 14 at El Corazon in Seattle, and wrapping up on March 11 at The Crafthouse Stage & Grill in Pittsburgh.

Says Sean: "After the European tour we did in September, it became clear that our live show was somehow even better than I ever imagined it could be. That is saying a lot because when I first conceptualized putting this band together five years ago, I thought back then it was going to be amazing. So even after the first practice we had, me and the band members looked at each other with that 'Holy shit!' look in our eyes after every song, because it was so sick and unique with the three of us just ripping it all together on these powerful, original heavy metal songs we made. Then, when we did the 17 shows in Europe and really locked it in, we experienced the feedback from the audience during and after the shows that confirmed what we were all thinking and feeling there up on stage. There were the super-skeptical people that came in first for a curiosity kind of thing that came up to us after the show and told us, almost apologetically, that they were completely blown away and sold after seeing it. And there were the guys with 20-year-old worn out battle vests with a million patches on it that would quietly walk up to me after the show, and calmly say in a heavy German accent or something, 'I have seen over one thousand heavy metal shows in my life and this was one of the best.' So after months of metalheads in America shouting from the rooftops for us to do dates in the U.S., I am stoked to finally announce our first U.S. tour dates."

Added Harry: "Do not miss the upcoming U.S. tour dates. We will be bringing our A game for sure! THE THREE TREMORS will put the power and perfection of pure heavy metal on full display. So get your tickets ahead of time, and let's make it an old-school heavy metal party in 2019!"

Said Ripper: "Playing our new album in its entirety like we do every night is a total blast. We are all having a great time together performing these songs live, and I know the American metal fans are going to dig them, too. We, of course, are also playing some stuff from our personal catalogs, and some highly requested metal classics, too. It is a long night of rocking, so be sure not to miss it!"

THE THREE TREMORS' self-titled debut LP is due on January 18. The band nourishes in heavy metal anthems, and features the illustrious chops of guitarist Dave Garcia, whose tenacity fuels the fire, allowing the music to naturally flow in complimentary tone. Second guitarist Casey Trask picks up the pace and pushes the boundaries alongside bassist Alex Pickard, who highlights a melodic sensibility giving character to the overall tonality. On drums, the thrash machine Sean Elg adds in his perfectly placed fills and signature double bass patterns. 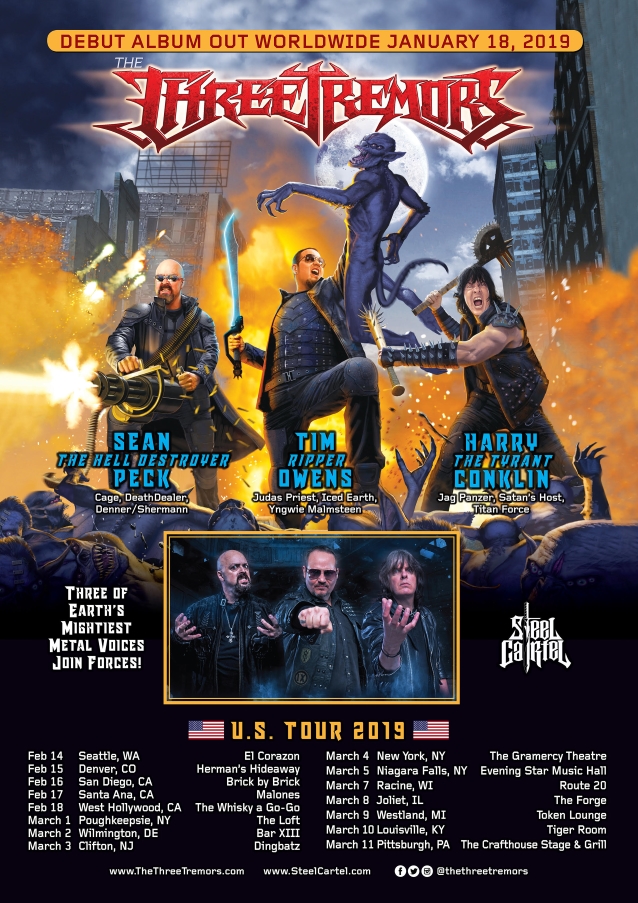