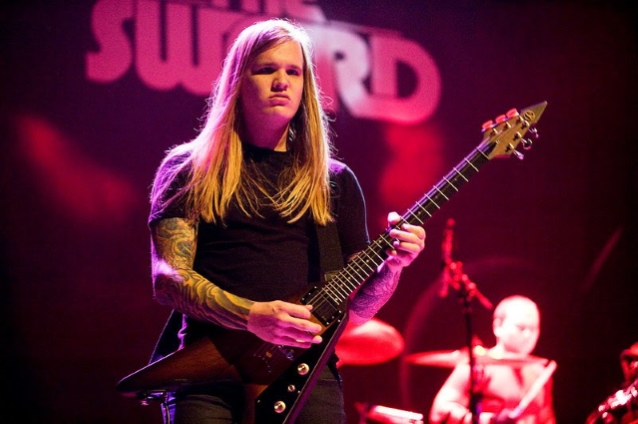 Multi-instrumentalist Kyle Shutt has announced plans to release his first-ever solo album in the spring of 2019. Shutt, who has spent the last 12 years touring the world as guitarist for the award-winning hard rock band THE SWORD, and just last year launched DOOM SIDE OF THE MOON: A HEAVY METAL TRIBUTE TO PINK FLOYD, plans to play all of the instrumentation on the solo release and handle vocals as well. The musician has launched a fan-friendly Kickstarter campaign to fund the project, which is slated for a May 2019 release. For full details on the campaign, which runs through October 31, visit this location.

"I love producing albums and rolling up my sleeves to tackle big challenges," says Shutt. "While wondering what to do with a mountain of material not necessarily fit for any band that I am in, I heard a tiny, very loud voice telling me to make a solo album in that very sense, solo! I'll be hitting those drums, slapping that bass, singing those lyrics, and absolutely shredding that guitar. If there's something that makes a noise I like, I'm playing it. Now, while making albums is a load of fun, it's also a load of work that, in 2018 doesn't come cheap. That's why I thought I'd ask you all be a part of the launching of this wacky solo career, which isn't just stopping with this initial album. I'm starting with this record and will go wherever my inspiration takes me."

"It‘s not easy being an artist these days, and I truly couldn't do this without your support," Shutt continues. "So if you have the faith in me to do my part in saving rock 'n' roll, pick up a record and a shirt and LET'S DO THIS THING!"

Shutt's Austin-based DOOM SIDE OF THE MOON project will perform its first-ever national live shows this December with just-announced gigs in Dallas, Denver and Brooklyn in addition to an encore performance in Austin. The autumn itinerary is as follows:

DOOM SIDE OF THE MOON tour dates:

"Taking DOOM SIDE OF THE MOON on the road, and to the sky for that matter, for these fly-in dates, is certainly the biggest project I've ever attempted, and I'd be lying if I said I wasn't nervous," Shutt states. "I can only imagine what PINK FLOYD felt like taking a show like 'The Wall' on the road. Those guys had such astounding ambition, I hope I do them justice by putting on the best tribute I can to their timeless catalog."

THE SWORD released its latest album, "Used Future", in March.