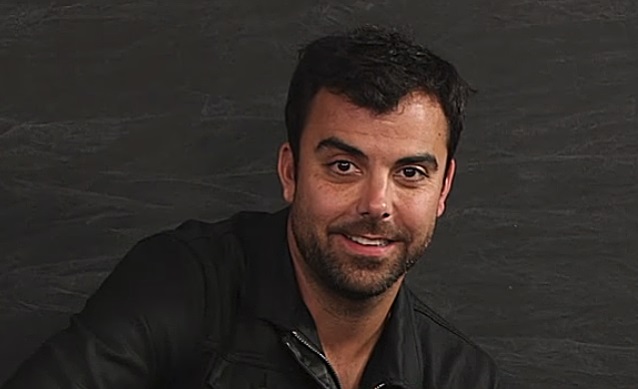 Dave Kushner has revealed that VELVET REVOLVER hired Franky Perez to replace Scott Weiland nearly a decade ago, only to dismiss the singer a short time later.

VELVET REVOLVER never officially found a new frontman following its April 2008 split with Weiland and has been more or less on hiatus, although it reunited with the former STONE TEMPLE PILOTS vocalist for a short one-off performance at a benefit concert in January 2012.

The only other vocalists known to have auditioned for the band were SPACEHOG's Royston Langdon and Corey Taylor from SLIPKNOT and STONE SOUR.

During an appearance on the "Fueled By Death Cast", Kushner, who played guitar in VELVET REVOLVER alongside Slash (GUNS N' ROSES), said that the band went on an extensive search for a singer following Weiland's departure from the group.

"We thought we could replace [Scott], and, obviously, we couldn't," Dave said (hear audio below). "We could never find anyone that was on that level or someone that was equally as awesome in a different way that we were, like, 'This is the new guy.' And we looked. We tried for, like, a year and a half.

"We recorded eight songs with Corey Taylor," he continued. "We had this guy Franky Perez, who is still a good friend of mine, who's a fucking amazing singer. We actually told him he was in the band — he was the only guy that actually got hired. But then we kept recording stuff with him and it just kind of… The longer we worked with him, the less it felt right. And there was other factors. I think Slash was getting ready to do a solo record, and I think his head was already kind of over there at that point.

"We worked with the singer from BIG WRECK; we worked with the singer from SPACEHOG," Dave added. "We even talked… I mean, we didn't work with Lenny Kravitz, but there was some talk about us doing stuff with him. There was a lot of talk. There were a lot of dudes trying to get that job too, like the first time [we searched for a singer before the release of the debut VELVET REVOLVER album], but obviously at that point, people knew. But it just didn't happen."

According to Kushner, Perez moved to Los Angeles from Las Vegas after he landed the VELVET REVOLVER singer gig. "He has no money, and then, all of a sudden he's not in the band," Dave recalled. "And I felt horrible for him, 'cause I always was kind of the underdog in the band. And I'm, like, 'Oh, dude, that's so fucked up.'"

Perez released a solo album, "Poor Man's Son", through Atlantic Records' imprint Lava in 2003, and later became the vocalist for SCARS ON BROADWAY (formed by Daron Malakian and John Dolmayan of SYSTEM OF A DOWN). He also collaborated with THE CRYSTAL METHOD, served as the occasional frontman for the all-star rock band CAMP FREDDY, and recorded and toured with Finnish cello rockers APOCALYPTICA.

In a 2015 interview with the Canadian rock journalist Mitch Lafon, Slash referred to VELVET REVOLVER as "an active project," but admitted that finding the right guy to front the band has been "difficult, because, as we move down the road in the millennium, the style of rock singers is changing a lot. And I think that with the [musical vision] that Duff [MacKagan, bass] and Matt [Sorum, drums] and Dave and I have for VELVET REVOLVER don't really cater to the sort of stylistic vocals that are happening as we move down the road from, I think, it was 2008, was the last thing we did — 2008 up until the present," he said. "I mean, I was really fortunate to find Myles [Kennedy for my solo band], and it was really a great thing that we just sort of locked in. But, yeah, trying to find a really genuine, honest rock and roll singer is getting few and far between."